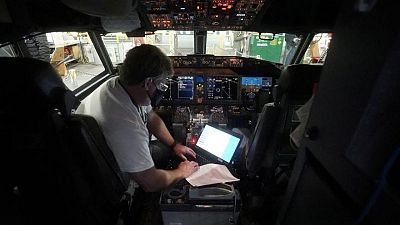 SEATTLE – Boeing Co said on Tuesday it had delivered 28 of its cash cow 737 MAX single-aisle jets to customers in April, seizing on rebounding air travel even as the U.S. planemaker battles industrial and regulatory hurdles across its jet portfolio.

The 35 overall deliveries in April was down from the 41 jets it handed over in March but more than double the 17 planes in the year-ago period.

The closely watched orders and deliveries monthly snapshot comes as Boeing struggles to overcome production flaws that snarled deliveries of its 787 Dreamliner for a year as well as certification risks on its forthcoming 737 MAX 10 and 777X jets.

On Monday, Boeing won a respite from the woes affecting its core widebody programs, when Lufthansa said it would buy 10 cargo planes including seven of the 777X version, also known as 777-8F.

The carrier also boosted its order for Boeing 787s as partof a compensation deal for delays to the 777X passenger version.

For April, Boeing booked 46 gross orders – including 44 for its 737 MAX from leasing companies and unidentified customers, and two 777 freighters, it said.

After 34 order cancellations, including AerCap scrapping two 787-10 jets, and instances where buyers swapped jet models, orders for April stood at 12.

For the year through April, Boeing booked 213 gross orders, or 157 after cancellations and conversions. After accounting adjustments, Boeing recorded 98 net orders for the year so far.