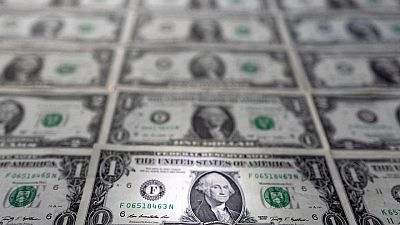 NEWYORK – The U.S. dollar reached a new 20-year high on Monday as risk-off sentiment stemming in part from concerns over the Federal Reserve’s ability to combat high inflation boosted the greenback’s safe-haven appeal.

The dollar has risen for five straight weeks as U.S. Treasury yields have climbed on expectations the Fed will be aggressive in attempting to tamp down inflation.

On Monday, Minneapolis Fed President Neel Kashkari said the U.S. central bank may not get as much aid from easing supply chains as it is hoping for in helping to cool inflation. Atlanta Fed President Raphael Bostic said he already sees signs of peaking supply pressures and that should give the Fed room to hike at half-percentage-point interest rate increments for the next two to three policy meetings, but nothing bigger.

Also contributing to the defensive tone was the ongoing war in Ukraine and concerns about rising COVID-19 cases in China.

“Right now, it seems like you have a trifecta of drivers here that are going to keep providing the dollar with solid footing,” said Edward Moya, senior market analyst at Oanda in New York.

“There’s this belief that you are not going to see any of the major risk factors resolved, definitely not this week, and that is probably going to make it complicated for ending the dollar’s reign.”

The Fed last week raised rates by 50 basis points as it attempts to lower inflation without tilting the economy into a recession, while a solid jobs report on Friday cemented expectations for more rate hikes. Investors will get a look at more inflation readings later this week in the form of the consumer price and producer price indexes.

Yields on most U.S. Treasury notes pared early gains to trade lower on Monday as bargain-hunters stepped in after the benchmark 10-year yield hit fresh 3-1/2-year highs of 3.203% as inflation fears continued to roil markets.

On Wall Street, stocks were trading sharply lower as growth stocks were again weighed down by climbing Treasury yields, although major averages were off their worst levels of the day after hitting fresh lows for the year.