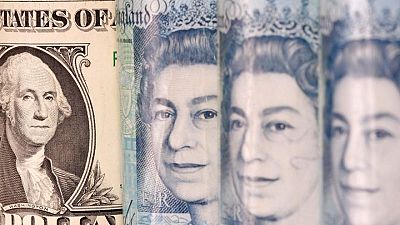 LONDON -Britain’s battered pound fell to its lowest level since June 2020 against the dollar for a third straight day on Monday as analysts turned increasingly bearish on the outlook for the currency after a policy meeting last week.

In a volatile session that saw sterling briefly pop higher, traders remained downbeat given growing the risks of a sharp slowdown in economic growth. Weekly positioning data showed hedge funds ramped up their short pound bets to their highest since October 2019.

There was a brief respite as the dollar came under broad-selling pressure, although by late London trading the pound was heading lower again.

“We’re looking for cable (sterling/dollar) to fall to $1.20 in the next month or so,” Nomura currency strategist Jordan Rochester saiding a massive shock to global growth from lockdowns in China and soaring energy prices as reasons for that outlook.

“Today’s price action has been odd – markets are still trying to work out what the Fed meant when it said last week it wasn’t actively considering 75 bps at upcoming meetings,” he said, referring to the U.S. Federal Reserve which last week hiked interest rates by 50 basis points.

Bank of England policymaker Michael Saunders, who last week backed a bigger rate rise than most of his colleagues, said on Monday he was worried that inflation could exceed BoE forecasts.

Last week, the BoE raised rates to 1.0% and said the economy was set to flat-line in 2023 and 2024, suffering from an inflationary surge.

Northern Ireland was also in focus after Irish nationalist party Sinn Fein won the most seats in the British province’s devolved assembly for the first time in elections last Thursday, ending a century of domination by pro-British parties.

Popular support for the DUP, which was a leading proponent of Britain’s 2020 exit from the European Union, was undermined in part by the party’s role in negotiations between London and Brussels that resulted in trade barriers between Northern Ireland and the rest of the United Kingdom in order to preserve the province’s open border with EU member state Ireland.

“The current UK trade deal is not that much better than a no deal – yet UK government threats to tear up the N.Ireland protocol will likely weigh on a vulnerable pound,” they said in a note. “Cable looks headed to 1.20 and euro/sterling to 0.86.”