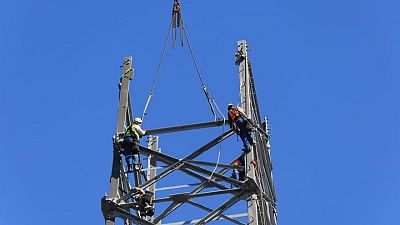 Amprion, 25%-owned by utility RWE and one of four high-voltage power grids, said milestone projects to bring power from the windy north to the industrial south and west are being sped up by a climate protection agenda and more acceptance by citizens.

“I am optimistic for quick approvals,” said chief executive Hans-Juergen Brick at a web conference.

“A lot is possible when everyone participates in the goal to make the energy transition safe.”

Germany’s government coalition includes a Green Party Economy Minister while war in Ukraine this year has underscored the need for energy independence from Russia, which will be accelerated by the country’s move towards low-carbon energy, Brick added.

Amprion’s key project A-Nord, a 2 gigawatt (GW) cable from the North Sea to the Rhineland will start up in 2027 and two offshore wind connections, BorWin4 and DolWin4 of 2 GW each, will be ready in 2028/29, the company said.

Corridor B, another 4 GW line from the North to the western Ruhr region, will be ready by 2030, transporting enough green power to replace five big coal generation plants.

Amprion wants Germany to slim planning authorities and merge tasks to ensure approvals within two years, and constructions to take a maximum of between two and 4 years, Brick said, instead of a previous total 10 years or more.

Two thirds of Amprion’s currently planned 3,900 new km of lines are within approval processes, the remainder are ready or near completion, in internal planning, or being built.

Of 12 billion euros ($12.63 billion) of investments planned over the next five years, 1.6 billion will be made this year.