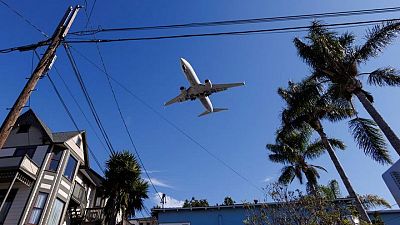 WASHINGTON -The Federal Aviation Administration (FAA) will meet Wednesday with telecom and airline industry officials on a push to retrofit and ultimately replace some airplane radio altimeters that could face interference from C-Band 5G wireless service.

The altimeters give data on a plane’s height above the ground and are crucial for bad-weather landings, but airline concerns about wireless interference from a planned 5G rollout led to disruptions at some U.S. airports earlier this year.

The FAA wants to use the meeting to establish “an achievable timeframe to retrofit/replace radar altimeters in the U.S. fleet,” according to a previously unreported letter from the FAA‘s top aviation safety official Chris Rocheleau reviewed by Reuters. It also asked aviation representatives “to offer options and commit to actions necessary to meet these objectives.”

Major airlines group, Airlines for America, declined to comment ahead of the meeting.

AT&T and Verizon Communications voluntarily agreed in January to delay through July 5 switching on some wireless towers and depowering others near airports just hours before the planned Jan. 19 deployment, averting what airlines had warned would cause a potentially “catastrophic” aviation safety crisis.

The delay did not prevent dozens of countries from canceling flights to the United States, casting the U.S. regulatory system in an ugly light.

The planned three-and-a-half hour roundtable meeting will also include a discussion on prioritizing retrofits with antenna filters, which mitigate potential interference from 5G.

Antenna filters are currently in production, officials said. A key question is how to determine which planes are most at risk of interference and should therefore get retrofitted first.

The meeting will also look at what is set to happen after July 5 and outline “changes to U.S. national airspace operating environment as a result of future 5G C-band deployment in the coming months.”

The FAA has been holding daily meetings with AT&T and Verizon that it said have “enabled us to closely tailor the areas requiring mitigation while aviation stakeholders take the necessary steps to retrofit existing radio altimeters with antenna filters.”

The FAA, which did not comment on the meeting, and others have conducted extensive testing of altimeters this year.

The FAA in January said it had issued approvals for altimeters that allow about 90% of the U.S. commercial aviation fleet to perform low-visibility landings at airports where 5G wireless is deployed.

Transportation Secretary Pete Buttigieg has been holding at least weekly meetings on the issue and told Congress last week they were making progress but said the issue “won’t be completely resolved by this summer.”