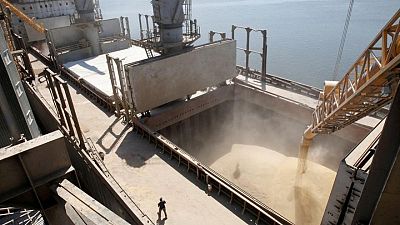 Since Moscow launched what it calls a “special military operation” in Ukraine in late February, the country has been forced to export grain by train over its western border or from its small Danube river ports rather than by sea.

Vadym Denysenko, an interior ministry adviser, said on Facebook the rate of grain transshipment in the ports of Reni and Izmail before the start of the war was $5-$6 per tonne, and with the outbreak of hostilities it increased to $12 dollars.

In April, he said, the rate increased to 15 euros per tonne and for May a rate of 20 euros was announced.

“I understand earnings, but a fourfold increase is no longer a market, it’s blackmail,” Denysenko said.

Traders confirmed an increase but gave no exact prices, while port authorities said they had no exact level of prices which “are set by commercial structures”.

Ukrainian authorities have repeatedly stated that they are making efforts to increase exports by rail and through the Danube ports and the volume of exports via these routes may soon increase to more than one million tonnes per month.

The agriculture ministry said last week traders had exported 763,000 tonnes of grain in the first 29 days of April versus 2.8 million tonnes in April 2021.

But Denysenko said just a little had been done to improve export conditions and “the market is becoming a monopoly”.