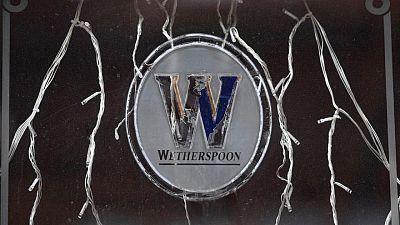 -Britain’s Wetherspoon expects to break even this year if there are no further COVID-19 restrictions, but a fresh warning from the pub group on Wednesday over “considerable” cost pressures sent its shares 4% lower.

The London-listed chain, which runs more than 800 pubs in the United Kingdom and Ireland, last reported an annual profit for the year ended July 2019 – before the pandemic took hold and lockdowns were imposed.

Britain’s hospitality sector is slowly recovering but it faces challenges from a cost of living crisis and Russia’s invasion of Ukraine that has raised commodity prices and further hurt confidence.

Wetherspoon, called simply Spoons by many younger customers, said it had returned to profitability and to a positive cash flow since March 13, but like-for-like sales for the 13 weeks to April 24 were 4% below the same period in 2019.

“Since (COVID-19) restrictions ended, sales have improved … and the company anticipates a continuing slow improvement,” said Chairman Tim Martin, an outspoken critic of Britain’s handling of the pandemic.

“As many hospitality companies have indicated, there is considerable pressure on costs, especially in respect of labour, food and energy,” he said.

The company in March also said it was facing higher costs.

“On one hand, Spoons’ reasonable price point could entice those slipping down the value chain. On the other, the cost-of-living crisis may well serve as a real blow to the group’s core demographic and ultimately drive them away,” she said.

Surging prices are causing the biggest squeeze on British household incomes since at least the 1950s and consumer confidence is at near record lows, prompting people to cut back on spending and save money.

Wetherspoon said it was “cautiously optimistic” about the possibility of a return to “relative normality” next year.