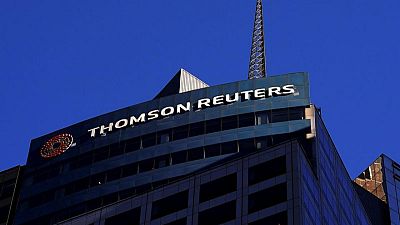 By Kenneth Li and Nick Zieminski

The parent company of Reuters News said that while the quarter gave it more confidence in its financial outlook, the pandemic, geopolitical risks and any worsening of the economy could hurt its ability to reach its goals.

The company, which also owns the Westlaw legal database and the Checkpoint tax and accounting service, reported adjusted earnings of 66 cents per share, 5 cents ahead of Wall Street expectations.

Shares gained about 0.5% in early New York and Toronto trading.

Total revenues rose 5.5% to $1.67 billion, just ahead of expectations, and are now forecast to increase 5.5% this year, up from an earlier estimate of about 5%.

“We’re off to a good start in 2022,” said CEO Steve Hasker. “We’re a little ahead of where we thought we’d be in terms of our revenue growth trajectory and we’re on track and executing on our change program.”

Thomson Reuters is wrapping up a two-year restructuring to transition from a holding company to an operating company with an emphasis on using artificial intelligence and technology to improve client businesses.

It said 80% of its revenue was recurring, providing some protection from unpredictable economic pressures.

CFO Mike Eastwood told analysts the company was raising prices on some long-term contracts, but this would take a while to show up in results.

Reuters News makes about half its revenue from supplying Refinitiv, a data company spun off from Thomson Reuters and now owned by the London Stock Exchange Group (LSE). Thomson Reuters holds a minority stake in the LSE worth about $7.2 billion as of Monday.

Funds for deals could be boosted next year when the company can begin selling off its stake in the LSE. Executives said high valuations had held back acquisitions, but they saw that situation improving recently.