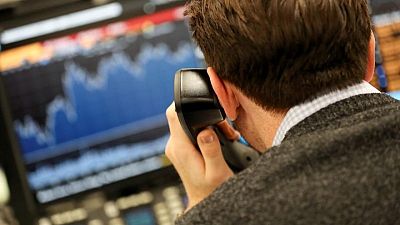 In U.S. Treasuries the benchmark 10-year yield rose, capping off the biggest monthly gain since December 2009 after economic data.

Equities were under pressure after data showed that monthly inflation surged by the most since 2005 while U.S. consumer spending increased more than expected in March amid strong demand for services. Also, first quarter U.S. labor costs surged by the most in 21 years, pointing to rising wage inflation, supporting Federal Reserve policy tightening ahead of its scheduled meeting next week.

“With the weekend approaching and the Fed meeting next week people are clearing the decks,” said Peter Tuz, president of Chase Investment Counsel in Charlottesville, Virginia, who also cited disappointing earnings and the Ukraine war.

“Russia, Ukraine is clearly driving up risk factors. It doesn’t show any sign of abating,” he said.

Ukrainian President Volodymyr Zelenskiy said there was a high risk peace talks with Moscow would collapse while U.S. lawmakers pledged to move fast on a plan to send as much as $33 billion to help Kyiv keep fighting Russia’s assault.

Ian Lyngen, head of U.S. Rates Strategy at BMO Capital Markets notes that the data could lead to a more hawkish response from the Fed.

“The operating assumption in the market at the moment is that the Fed has sufficient flexibility to ratchet up the pace of hiking in response to any further acceleration of inflationary pressures,” he said.

The Nasdaq showed its biggest monthly decline since October 2008. [.N]

The pan-European STOXX 600 index had risen 0.74% but MSCI‘s gauge of stocks across the globe shed 1.88%. And on the last trading day of April, the global index was on course for its biggest monthly decline since March 2020.

Amazon shares closed down 14% after the e-commerce giant delivered a disappointing quarter and outlook late Thursday as it was swamped by higher costs to run its warehouses and deliver packages to customers..

Russia’s rouble hit a two-year peak against the dollar and the euro on Friday as capital controls helped it weather another larger-than-expected interest rate cut and Russia appeared to make a last-gasp effort to avoid a default.

Other emerging market currencies also rallied on the dollar’s retreat.

The dollar looked set to snap a six-day advance against a basket of currencies on Friday although it was still on track for its biggest monthly gain in seven years as concerns about the global economy and a hawkish Federal Reserve bolstered demand for the greenback in April. [L2N2WR1KY]

The benchmark 10-year U.S. yields, having risen as high 2.981% on April 20, its highest level since December 2018, were eying five straight months of gains.

Oil prices fell on Friday, reversing late in the volatile session, pulled downward by the U.S. heating oil contract that plummeted by more than 20% at one point on the day of its expiration. [O/R]

Gold prices gave up some gains after earlier rallying as much as 1.3% when the dollar retreated and the precious metal was set to end the month lower on bets of aggressive Fed policy tightening.

“The GDP data and the cost index for employment data showed that inflation still running fairly hot. This is generally supportive for gold,” said Edward Meir, an analyst with ED&F Man Capital Markets.