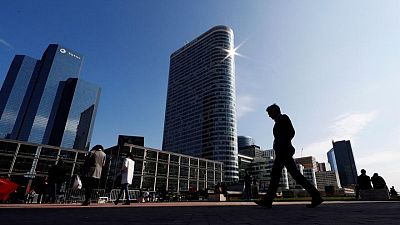 By Jan Strupczewski and Balazs Koranyi

BRUSSELS/FRANKFURT -Euro zone economic growth was slower than expected in the first three months of the year, preliminary data showed on Friday, as the war in Ukraine started on Feb 24 hit economic activity and helped drive inflation to a new high.

Euro zone inflation rose to 7.5% in April from 7.4% in March, in line with expectations, driven by a persistent surge in energy and food prices that have been exacerbated by the Russian invasion of Ukraine.

The European Commission forecast just before the invasion that euro zone growth would be 0.3% quarter-on-quarter, so the preliminary data, if confirmed, would suggest the war and the related commodity and food price spikes cut growth by 0.1 percentage points.

Eurostat said Italy’s economy contracted 0.2% in the first quarter against the previous three months, which would make it the biggest euro zone casualty of the conflict. In February, the Commission forecast Italy would grow 0.3%.

“We expect another weak reading in 2Q22, as the Russia-Ukraine crisis will take its toll on business activity and demand, as suggested by the latest confidence indicators,” said Loredana Maria Federico, Italy Economist at UniCredit Bank.

Germany, expected by the Commission to grow 0.4% in the first quarter grew by only 0.2%, Eurostat said and France recorded no growth according to Eurostat against a Commission February forecast of 0.1% expansion.

Commerzbank said in a research note it expected German growth to stagnate in the second quarter because of the hit to manufacturing sentiment and the jump in Germany’s energy bill resulting from the Ukraine war.

All this is likely to cause the euro zone economy to shrink in the second quarter, economists said.

“Manufacturers will take a bigger hit in Germany than in other parts of the euro-zone, but the increase in energy prices will affect the entire region, as will the fall in export demand and business confidence,” he said.