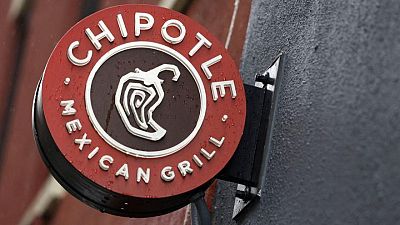 By Praveen Paramasivam and Hilary Russ

The burrito chain forecast comparable restaurant sales growth of 10% to 12% for the current quarter, compared with estimates of 8.8% growth, according to IBES data from Refinitiv.

Chipotle, like rivals McDonald’s Corp and Starbucks Corp, has raised prices of its in-store and delivery menus in a bid to counter higher prices for everything from employee wages to beef, avocados and paper.

Food, beverage and packaging costs in the first quarter were 31% of total revenue, an increase of 100 basis points from a year earlier.

In late March, Chipotle hiked the price of a carnitas bowl at one New York City location by 5% to $11.55, a Reuters track of prices showed, though raising menu prices is “really the last thing we want to do,” CEO Brian Niccol said in an interview.

Chipotle’s core customers – which analysts say are among the most affluent and youngest – have not pushed back against more expensive meals, Niccol said.

Despite increased prices for customers, higher food costs also squeezed restaurant margins, which dropped 160 basis points to 20.7%. Margins should rebound to 25% in the second quarter if inflation stabilizes, he said.

On an adjusted basis, Chipotle earned $5.70 per share in the first quarter, beating estimates of $5.64.