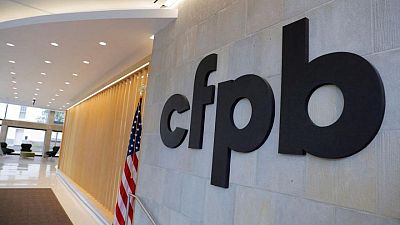 WASHINGTON -The U.S. Consumer Financial Protection Bureau (CFPB) will promote competition and scrutinize the outsized influence Big Tech firms have in the marketplace, its director told the Senate Banking Committee during a hearing on Tuesday.

Rohit Chopra, who was sworn in as CFPB director in October, fended off attacks from Republicans over his role in a regulatory spat.

He is planning initiatives that will identify ways to lower barriers to entry and expand the pool of firms competing for customers based on quality, price, and service, he said.

“We are especially interested in ways that small financial institutions can leverage technology and systems … to capture market share while still preserving their relationship banking model,” Chopra told lawmakers.

In October, just a few weeks into the job, Chopra made his mark by ordering Amazon.com Inc, Apple Inc and Facebook Inc to hand over information about how they gather and use consumer payment data, citing that there were many places where regulators should be promoting competition and innovation in to benefit small businesses and families -not just the firms.

On Tuesday, he provided the first update on what his scrutiny will yield. He also committed to propose a rule on open banking and small business lending data which will be issued in a “timely fashion.” Open banking allows third-party internet-based applications to compete with big banks by accessing a customer’s accounts to make payments, among other services.

Republican members of the panel rebuked Chopra for his agency’s enforcement activity around repeat offenders as well as broad requests for information on new financial technology firms, arguing such moves can stifle innovation and burden companies.

After a public spat in December, Republicans scolded Chopra for his “hostile takeover” of banking watchdog, the U.S. Federal Deposit Insurance Corporation (FDIC) — of which Chopra is a board member — in which the board’s new Democratic majority moved to advance agenda items over the objections of its Republican chairman, Jelena McWilliams.

The maneuver, which Chopra defended on Tuesday, sparked a public feud at the regulator and led to McWilliams’ early exit as chair.

“I am disappointed that the rule of law was not followed, and it is important that this never happens again, and the board must make sure of it.”

Chopra — a longtime consumer advocate tapped by Democratic President Joe Biden to crack down on predatory lending and inequities in the consumer finance system — also responded to Republican lawmaker criticism after the agency in March expanded a standard targeting racial discrimination in lending.

“The CFPB claimed the authority to sue financial services providers for discrimination without any evidence of discriminatory intent,” said Republican Senator Pat Toomey, who is the banking panel’s ranking Republican.

The CFPB has been a political lightning rod since its creation following the 2009 financial crisis. Democrats believe the agency is critical to protecting consumers and bolstering Biden’s agenda to address racial inequity and wealth inequality issues, while Republicans say the agency is too powerful and unaccountable.

Chopra also faced questions from Democrats on his competition push; his focus on lenders’ junk fees, including services like overdrafts and credit card late payments; and his efforts to stamp out abuses around loan servicing and credit reporting.

During the hearing, progressive Senator Elizabeth Warren called on Chopra to help break up scandal-hit lender Wells Fargo, arguing that repeat offenders should not just be fined, but should be penalized more fiercely.

While Chopra did not directly comment on Warren’s suggestion, he agreed tougher sanctions are needed for large recidivist lenders.

“We have to look at structural remedies that stop the law breaking from continuing. Fines are not going to solve this with the biggest players,” he said.

Analysts said that the hearing reaffirms a handful of themes, including enforcement and policy directions of the agency.

“While Chopra’s focus on big tech’s role in payments could be an issue that received bipartisan support conceptually, it remains to be seen what we will come beyond reports and jawboning,” said Isaac Boltansky, policy director for brokerage BTIG.