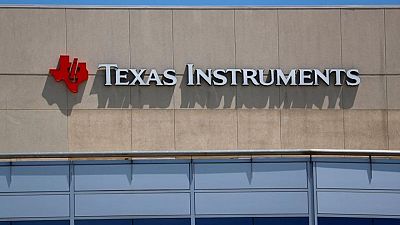 -Texas Instruments Inc forecast second-quarter revenue below Wall Street estimates on Tuesday, hit by reduced demand due to COVID-19 lockdowns in China, sending its shares down 7%.

China has put Shanghai under a lockdown since late March and neighboring city Kunshan has also tightened curbs to control the country’s biggest COVID-19 outbreak since late 2019.

It has caused dozens of Taiwanese firms, many making parts for the semiconductor and electronics industries, including Apple suppliers, to suspend operations.

Last year, when demand for electronics, including smartphones and consumer gadgets, rose, many semiconductor makers doubled down on production.

The company’s analog and embedded processing chips are used in a range of products that cater to a broad market, lowering the risk from dependence on a single customer segment.

Texas Instruments expects second-quarter revenue to be between $4.20 billion and $4.80 billion, compared to analysts’ expectations of $4.94 billion, according to IBES data from Refinitiv.

Total revenue in the first quarter was $4.91 billion compared with $4.29 billion a year earlier. Analysts were expecting revenue of $4.74 billion, according to IBES data from Refinitiv.