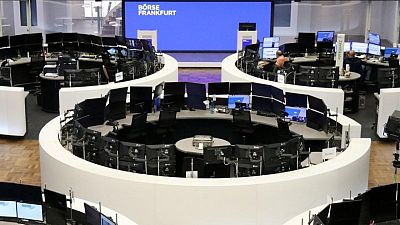 As investors flocked to the safety of bonds, the continent-wide STOXX 600 index dropped 1.8% to close at its lowest since mid-March. [GVD/EUR] [.L]

China-exposed sectors such as miners, oil & gas and luxury stocks were among the top decliners as fears grew that Beijing was on the verge of joining Shanghai in pandemic-related lockdowns.

“The prospect of further restrictions in China could lead to a poisonous mix of further inflationary pressure, as supply chains in the so-called ‘factory of the world’ get disrupted, and weaker economic growth,” said AJ Bell investment director Russ Mould.

“The result could be stagflation – a slowing economy accompanied by surging prices – a brew few investors would be able to stomach.”

Miners marked their worst session in two years as industrial metal prices slumped on concerns about waning demand from the top metals consumer, while oil and gas stocks dropped 4.8%. [MET/L]

HSBC and Standard Chartered which are also vulnerable to China weakness, dropped 4.1% and 3.5% respectively. The bank index lost 3%.

A gauge of eurozone stock market volatility spiked above 30 points for the first time in almost two weeks.

French stocks have outperformed the wider STOXX 600 index over the past two weeks after polls put Macron in the lead, although his economic platform now depends on parliamentary elections in June.

“What we saw these last two weeks is the repricing of Macron victory as polls have been widening. So for the market it is good news, but the impact should be relatively limited today,” said Roland Kaloyan, head of European equity strategy at Societe Generale.

Shares of French infrastructure group Vinci gained 1.3% after a sell-off on fears of nationalisation by Le Pen.

In a busy week for earnings, 144 of the STOXX 600 companies are expected to report quarterly results.

Dutch health technology company Philips plunged 11.3% to its lowest since 2016 after reporting a hit to first-quarter profit.