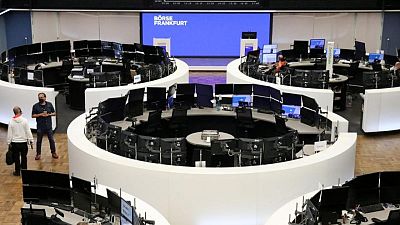 By Anisha Sircar and Sruthi Shankar

-European shares closed at near one-month lows on Friday as a cocktail of negative factors from China’s COVID lockdowns to worries about rapid interest rate hikes subdued sentiment globally.

The basic resources sector, which houses global miners such as Glencore and Rio Tinto, tumbled 3.6% as metal prices took a hit from lockdowns in top metals consumer China. [MET/L]

Broadly, world stocks hit five-week lows as investors feared that rapid interest rate hikes in the United States, Britain and the euro zone in the face of surging inflation will weigh on economic growth.

U.S. Federal Reserve Chairman Jerome Powell said on Thursday a 50-basis-point rate increase “will be on the table” when the bank meets on May 3-4, while the European Central Bank is likely raise rates before the end of the year, chief Christine Lagarde told CNBC on Friday.

“The market had seemed to adjust to a faster pace of hikes, but the view is now that, if Powell is happy with 50 basis points, then it gives cover for others to call for even faster tightening,” said Chris Beauchamp, chief market analyst at online trading platform IG.

“This has cut the foundations from underneath the rally in stocks over recent days, and suggests that the second half of April will be just as tough as the first for most equities.”

Traders ramped up bets that the ECB would hike its policy rate — currently at by around 85 bps by the end of the year, up from around 70 bps on Thursday. [GVD/EUR]

France’s CAC 40 closed 2.0% lower, along with the broad selloff but outperformed on a weekly basis on expectations that Macron would win his re-election bid.

There were some earnings disappointments too. Kering fell 4.3% after posting downbeat sales at its crown jewel Gucci, hurt by lockdowns in China.