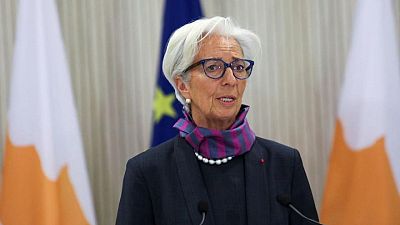 With inflation at record highs and still rising, the ECB has been cautiously unwinding support for months and policymakers are now openly talking about the possibility of an interest rate rise, the first for the bank in over a decade.

“If the situation continues as predicated at the moment, there is a strong likelihood that rates will be hiked before the end of the year,” Lagarde said. “How much, now many times, remains to be seen and will be data dependent.”

The ECB last week confirmed plans to end bond purchases, known as quantitative easing, sometime in the third quarter but Lagarde said the move should happen in the early part of the quarter.

Such a timeline would suggest that the ECB could be in place to raise rates at the July 21 meeting, as the conclusion of bond buys is considered a precondition for any interest rate move.

But the war in Ukraine is complicating life for the ECB as high energy prices and sanctions on Russia sap confidence, eat into purchasing power and cut deep into growth.

Still, Lagarde said that the bloc’s economy will continue to grow and stagflation or a period of high inflation coupled with stagnating economic output, is unlikely.