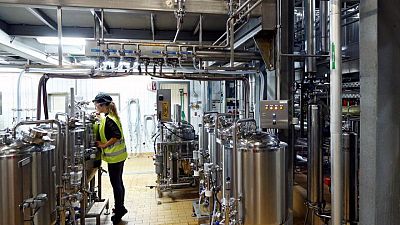 BRUSSELS – Anheuser-Busch InBev plans to exit Russia by selling its interest in a joint venture with Turkish brewer Anadolu Efes that operates in Russia and Ukraine and expects to take a $1.1 billion charge as a result.

The announcement on Friday by the world’s largest brewer, based in Belgium, comes after similar moves by its rivals Carlsberg and Heineken following Russia’s invasion of Ukraine, which Moscow dubs a “special operation” to demilitarise its neighbour.

In March, AB InBev sought to suspend sales of its Bud brand in Russia and said it would forfeit profits from the AB InBev Efes joint venture.

On Friday, it said it would sell its non-controlling interest in the venture and was in active discussions for Anadolu Efes, to acquire it.

It added it would no longer recognise investments in the venture and will report a $1.1 billion non-cash impairment charge in its first-quarter results due on May 5.

The venture contributed $1 million to AB InBev’s profit in 2021.

Anadolu Efes confirmed it had started negotiations over the sale. It is not clear if AB InBev aims to keep a presence in Ukraine, but it has requested that the venture stop the production and sale of Bud brand beer in Russia.

AB InBev has a 24% stake in Anadolu Efes, part of its 2016 purchase of next largest rival SABMiller. They formed the AB InBev Efes 50:50 joint venture in 2018, combining their respective Russian and Ukrainian businesses.

The venture has 11 breweries in Russia, employing 3,500 people and three in Ukraine, employing 1,800. Carlsberg is the leading Western player in Russia, followed by AB InBev.

The Danish brewer said on Thursday its decision to sell its business in Russia would result in a writedown of about $1.4 billion. Dutch rival Heineken has said its Russia exit would lead to related charges of about 400 million euros ($434 million).