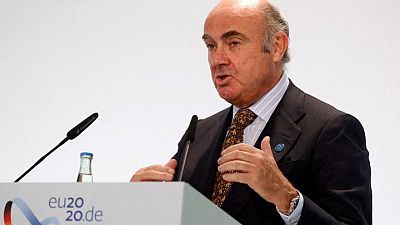 FRANKFURT -The European Central Bank should end its stimulus programme in July and could raise interest rates that same month, in September or later, ECB vice-president Luis de Guindos said in an interview published on Thursday.

The ECB said last week that it would stop buying bonds in the third quarter of the year and raise interest rates some time after that, ending years of monetary largesse in the face of surprisingly high inflation.

De Guindos was joining a growing number of ECB policymakers, including the Bundesbank’s President Joachim Nagel, in calling for an early end to the Asset Purchase Programme.

“My opinion is that the programme should end in July and for the first rate hike we will have to see our projections, the different scenarios and, only then, decide,” de Guindos told Bloomberg.

“From today’s perspective, (raising rates in) July is possible, and September or later is also possible,” he added.

Speaking to global policymakers in Washington on Thursday, ECB President Christine Lagarde also said future steps “will depend on the incoming data and (the ECB‘s) evolving assessment of the outlook”.

“In the current conditions of high uncertainty, we will maintain optionality, gradualism and flexibility in the conduct of monetary policy,” she told the International Monetary and Financial Committee.

But Belgian central bank governor Pierre Wunsch, a policy hawk, was more outspoken, saying in a Bloomberg interview that raising the ECB‘s policy rate, currently at minus 0.5%, to zero or slightly above by year-end would be a “no brainer”.

The ECB will update its macro-economic projections in June and again in September.

These estimates will be crucial because the ECB has said it would only raise rates when it is confident that inflation would stay at its 2% target over its forecast horizon.

Inflation in the euro zone hit a record 7.5% last month and de Guindos hinted at it staying above the ECB‘s current projections for the rest of the year.

“Inflation will start to decline in the second half of the year,” he said. “But even so, it will be above 4% in the final quarter.”

The ECB said in March it saw inflation at 5.6% in the second quarter, 5.2% in the third quarter and 4.0% in the final three months.