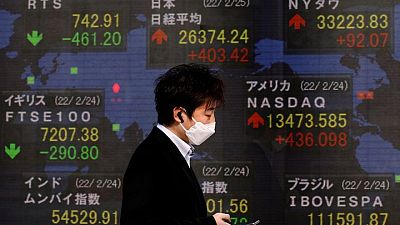 WASHINGTON – U.S. stocks were mixed in afternoon trading on Wednesday as the tech-heavy Nasdaq was dragged down by bleak Netflix earnings, while bond yields dipped and oil regained ground.

The Dow Jones Industrial Average and S&P 500 both looked set for a second day of gains, but the Nasdaq Composite fell sharply after Netflix reported it had lost subscribers for the first time in over a decade, casting gloom over the tech sector.

“The Netflixes of the world, the Pelotons of the world are looked at with more scepticism as the market questions the success they have from a fundamental standpoint during the pandemic,” said Keith Buchanan, senior portfolio manager at Globalt Investments in Atlanta.

U.S. Treasury yields dipped after hitting three-year highs on Wednesday as buyers emerged. Benchmark 10-year yields were last at 2.8455%, after reaching 2.981% overnight, the highest since Dec. 2018.

Investors got a fresh glimpse into the Federal Reserve’s economic outlook when it issued its “Beige Book” of economic conditions from late February to early April on Wednesday. The central bank reported the economy expanded at a moderate pace during that time, though business reported issues with high inflation and worker shortages.

The Fed is expected to continue to roll out rate hikes at upcoming meetings in its bid to get a grasp on spiking inflation as several officials have struck a more hawkish tone.

“The Fed’s record shows that achieving soft landings whilst attempting to rein in inflation with rate hikes of this magnitude is next to impossible. On top of this, in virtually all previous hiking cycles, inflation started at much lower levels than in this one,” wrote Deutsche Bank analysts in a note.

Complicating matters were signs of a slowdown in the U.S. housing market, as home sales dropped to their lowest level in nearly two years in March amid rising prices and mortgage rates.

The dollar stepped back slightly after hitting a fresh two-decade peak to the yen, buoyed as the Bank of Japan stepped into the market again to defend its ultra-low interest rate policy. The dollar index, which tracks the greenback versus a basket of six currencies, was down 0.63% to 100.323.

Oil prices stabilized after large losses earlier in the week and another trip into negative territory Wednesday. Oil prices have proven volatile recently as investors balance a drop in U.S. oil inventories and concerns over tighter supplies from Russia and Libya with broader concerns about economic growth.

Spot gold was up slightly, recovering 0.13% after posting its lowest level in a week as bond yields eased.