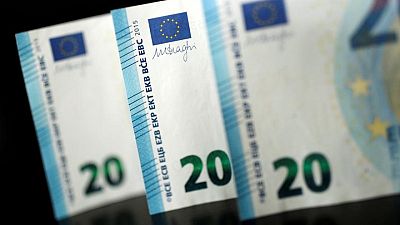 ORLANDO, Fla. -The euro’s share of world currency reserves has been depressed for years as negative euro zone interest rates and bond yields have spurred huge bond outflows. But these dynamics are reversing, and the euro is catching the eye of reserve managers again.

The International Monetary Fund’s latest composition of official foreign exchange reserves (COFER) data indicates that central banks increased their euro holdings by as much as $70 billion in the fourth quarter of last year.

That was the most in over three years, according to HSBC.

The COFER report does not capture the financial market tremors sparked by Russia’s invasion of Ukraine in February and heavy economic sanctions imposed by Western nations on Moscow.

They included the freezing of almost half of Russia’s $640 billion stash of foreign reserves, prompting intense debate over the future of reserves, the U.S. dollar’s status as global currency king, and the outlook for other currencies’ share of reserves.

Morgan Stanley strategist David Adams notes that reserve managers use three broad investment criteria to determine their allocations: liquidity, returns, and safety. All three boxes could soon be ticked for the euro.

The share of negative-yielding euro zone bonds is rapidly shrinking and European Central Bank interest rates could be positive by the end of the year; liquidity will increase when the ECB begins reducing its balance sheet; and the Russia-Ukraine war could spur more issuance of top-rated joint bonds in the euro zone.

“If the ECB is beginning to normalize policy … that will improve liquidity and raise returns for investors, including reserve managers,” said Adams.

In that five-year period the dollar’s share of global FX reserves has fallen almost five percentage points to a 25-year low of 58.81%.

For the euro, this can be looked at in two ways: central banks cooled on the dollar but shunned the euro in favor of other currencies; or, the euro has proved more resilient than the dollar to central bank FX reserves diversification.

But there is a lot of ground to make up following the slump in euro holdings after the ECB went from ‘ZIRP’ to ‘NIRP’ – from zero interest rate policy to negative interest rate policy – in June 2014. The euro’s share of world FX reserves fell by some 5 percentage points over a two-year period at the time.

According to Tradeweb, the value of euro-denominated negative-yielding government debt on its bond trading platform peaked at almost 7 trillion euros – some 75% of the near-9 trillion sovereign euro bond market – in late 2020.

But at the end of last month, the amount of negative-yielding debt had fallen to 2.07 trillion euros, the lowest since at least 2016 when Tradeweb first started compiling the data.

“A reversal of these persistent outflows could have important implications for the euro,” wrote Goldman strategist Zach Pandl last month when he and his team raised their euro forecast to a bullish and out-of-consensus $1.20 over 12 months and $1.30 by the end of 2024. The euro was at $1.09 on Wednesday.

The reversal appears to be underway.

(The opinions expressed here are those of the author, a columnist for Reuters.)