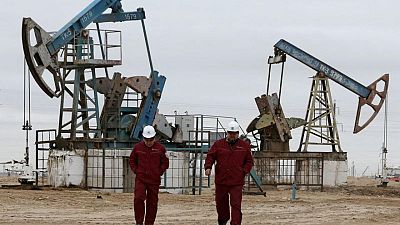 HOUSTON -Oil prices settled higher on Thursday after an early decline as investors covered short positions ahead of the long weekend and on news that the European Union might phase in a ban on Russian oil imports.

Both contracts recorded their first weekly gain in April. For several weeks, prices have been the most volatile since June 2020.

The New York Times reported that the European Union was moving toward adopting a phased-in ban of Russian oil, to give Germany and other countries time to arrange alternative suppliers.

A phased-in ban would force European buyers “to seek alternative sources, some of which in the near term is being met by Strategic Petroleum Reserve releases, but in the future, more supplies coming out of the ground will be required,” Andrew Lipow of Lipow Oil Associates in Houston said.

The International Energy Agency had warned on Wednesday that roughly 3 million barrels per day of Russian oil could be shut in from May onwards due to sanctions or buyers voluntarily shunning Russian cargoes.

Russia’s Energy Ministry said it was limiting access to its statistics on oil and gas production and exports.

Trade was going to continue to be “somewhat nervous” as the war between Russia and Ukraine continues and as countries weigh banning Russian supplies, Price Futures Group analyst Phil Flynn said.

“The big question is going to be, how many people are going to want to be short oil going into the long weekend?”

Traders also adjusted their position on Thursday as U.S. May crude options expire on Thursday.

U.S. oil rigs rose by two to 548 this week, their highest since April 2020, energy services firm Baker Hughes said in a report.

However, on the demand side, Chinese refiners are set to cut crude throughput this month by about 6%, a scale last seen in the early days of the COVID-19 pandemic two years ago, to ease bulging fuel inventories during recent lockdowns, industry sources and analysts said.