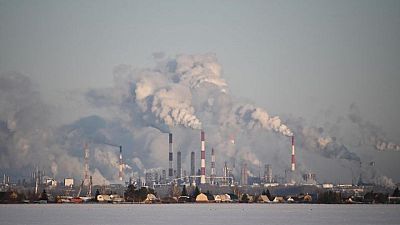 BERLIN – The European Union should impose an embargo on Russian oil as soon as possible, the chairmen of three German parliamentarian committees said on Tuesday after a visit to Ukraine.

With mounting civilian deaths in Ukraine amid Russia’s invasion, Germany, Europe’s largest economy, is under pressure to wean itself off Russian gas and oil, as critics say the revenue provides Moscow with vital funds to wage war.

The EU is drafting proposals for an oil embargo on Russia although there is no agreement among member states on banning Russian crude. EU diplomats say Germany is not actively supporting an immediate embargo on Russian oil.

Chancellor Olaf Scholz has said Germany could end Russian oil imports by the end of the year. The country has already reduced its energy imports, with Russian oil now accounting for 25% of imports, down from 35% before the Feb. 24 invasion.

Roth said a quick EU decision could be combined with a transition phase like the import ban on Russian coal, which will come into effect from mid-August after EU ambassadors agreed on it last week.

Roth’s comments came after he visited western Ukraine on Tuesday with two parliamentarian committee heads from the ruling coalition parties.

“It can be done within a few weeks because there are other suppliers,” said Anton Hofreiter, the head of the Bundestag’s Europe’s Committee, adding that the phase-out period to implement the ban on Russian coal was too long.

However, a survey published on Wednesday showed that Germans are concerned about negative consequences from a possible oil embargo.

Only 30% of respondents in the survey by the Allensbach institute on behalf of Frankfurter Allgemeine Zeitung said that Germany should immediately halt imports of Russian oil and gas to stop indirectly financing Russia’s war on Ukraine.

Some 57% of respondents said Germany must continue imports to avoid supply shortages and price spikes. Only 24% agreed with the statement “We can freeze for freedom”.