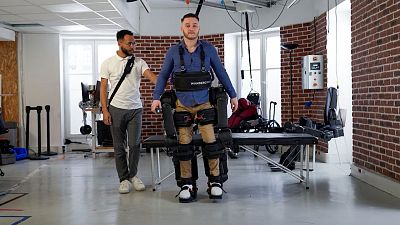 Kevin Piette lost the use of his legs 10 years ago after a road accident, and while most of the time he uses a wheelchair to get around, some days he puts on an exoskeleton that allows him to stand up autonomously, walk and do the most simple tasks.

It was out of the question for the 33-year-old to stay stuck on the sofa all day. Piette threw himself into motorsports for several years, which eventually led to his introduction to Wandercraft, a French exoskeleton company that offers wearers the ability to walk with the assistance of a robot.

The company was looking for an exo-skeleton pilot - and hired Piette as their tester.

“The first time you stand up is pretty impressive because you can do it very easily, very quietly, comfortably. And then you have this upright posture that you had actually forgotten about,” he told Euronews Next.

He said cooking while standing up and taking things out of the cupboard were the things he missed and can now achieve with the robot.

“To be able to cook and reach things up high, things that are part of a really banal day of life was rewarding. It’s also really nice to be able to be at the same level as people instead of always looking up at them from below,” he said.

Being able to stand up also brings health rewards as he says it has improved his blood flow, which helped his digestion and also allowed him to reduce the amount of medication he takes.

The company released its latest self-balancing model, the Atalante X model, this month.

It is currently used in hospitals to help with rehabilitation and can only be used indoors.

It’s also really nice to be able to be at the same level as people instead of always looking up at them from below.

It works by using 12 motors: six at the hips, two at the knees and four at the ankles, which makes the movements feel more natural.

The user controls the exoskeleton with a remote and a sensor that sits at the back, which is controlled by upper body movement.

It takes just a couple of minutes to put on and Piette says he can do this by himself.

The next stage is to develop a fully autonomous model that people could wear outside.

Wandercraft raised $45 million (€41 million) last December to build the world’s first personal self-balanced exoskeleton, which could be used both outside and at home.

The company was launched in 2012 by three engineers who wanted to improve the lives of people in wheelchairs.

“The wheelchair is not a failure, on the contrary, it is a tool of freedom,” said Wandercraft co-founder Jean-Louis Constanza, whose own son uses a wheelchair.

“The company’s goal is to allow people who cannot or no longer walk the chance to walk again”.

“Today, there is no walking robot or walking exoskeleton that walks autonomously and like a human. So not only did we do a lot of technology work, but also scientific work, and we had to find investors who followed us for a long period and for amounts that are quite high,” he said.

“We have been successful because we have a project that really changes society”.

The main challenge for a fully autonomous model that could be used outside is to make the technology cheaper, less bulky and ensure it is safe and stable.

“We have to develop our algorithms in terms of stability and reliability,” said Wandercraft engineer Jean-Louis Kana.

“We will end up with the same problems as autonomous cars. Typically, if the patient has an accident, falls, or gets pushed around - who is responsible? And so, there are both technological and regulatory issues”.

But for Piette and the millions of people who use wheelchairs, if the technology is developed and approved, the possibilities are boundless.

“The future for us is being able to go home, and then after that, there’s the next phase: That’s outside, going out, walking outside, going for a stroll, driving a car, going to a bar, doing grocery shopping, going to a museum,” Piette said.

“The prospects are limitless”.

Intermittent fasting may be no more effective than a normal diet

The map of our DNA is finally complete. Here's why it matters