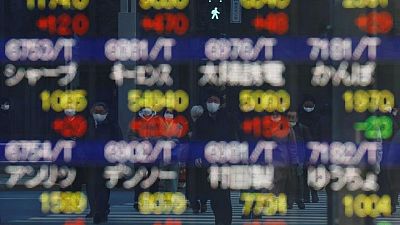 WASHINGTON -Global equities reversed earlier gains on Tuesday, while U.S. Treasury yields slipped as data showing a jump in U.S. inflation was in line with expectations gave investors some relief.

The U.S. consumer price index rose 1.2% last month, the biggest increase in 16-1/2 years and cementing the case for a 50 basis points interest rate hike from the Federal Reserve next month.

However, the benchmark 10-year Treasury yield was last down 6.1 basis points to 2.721%, its first decline in eight sessions, as the inflation number had been priced in and also reflecting the market’s unease that an aggressive policy response to inflation from the Federal Reserve could undermine economic growth.

“Inflation is still a really big part of the macro narrative here (but) we’re seeing some encouraging signs beneath the surface,” said Mike Reynolds, vice president of investment strategy at Glenmede.’

“Market has been picking up today on the fact that the CPI was a bit softer than expected… Anything that indicates a softening momentum on the inflation front is going to mean that the Fed perhaps may not have to go as aggressively in tightening monetary policy.”

Oil prices climbed on Tuesday as Russian oil and gas condensate production fell to 2020 lows and OPEC said it would be impossible to replace potential supply losses from Russia. [O/R]

“Markets have decided that central banks are late and need to do more to tame inflation, and moderate volatility in equities is not enough to stop this,” said Nordea chief analyst Jan von Gerich. “The reason for the wobble in equity markets is higher rates and geopolitics.”

While U.S. 10-year Treasury yields pulled back from their highs, they are up almost 45 basis points so far this month.

More disconcerting for equities is the move in real or inflation-adjusted yields, with the yield on the 10-year U.S. Treasury Inflation-Protected Securities (TIPS) approaching 0%.

Investors also await Wednesday’s first-quarter earnings season for big banks, many of which are expected to report a sharp decline in earnings from a year earlier, according to analysts, who noted many lenders benefited from exceptionally strong deal-making, trading and funds set aside for loan losses being released.

The dollar index, a measure of the greenback’s value against six peers, rose 0.26%, after earlier in the week touching its highest level in almost two years.

Japan’s yen, however, has been hurt by the Bank of Japan’s commitment to maintaining ultra-easy policy even as the Fed embarks on tightening monetary policy.

The latest warnings from Japanese policymakers, with Prime Minister Fumio Kishida saying on Tuesday that rapid currency moves are undesirable, failed to shore up the yen, which has shed over 3% this month.

“Markets at this point are not sure policymakers are genuinely inclined to intervene on the yen and that’s why we have most likely seen a limited impact,” said James Lord, global head of FXEM Strategy at Morgan Stanley. “Typically verbal intervention doesn’t have much impact on currency markets, and that’s not specific to the yen.”

The euro traded down 0.53% to $1.0825, unable to hold gains from a mini-relief rally on Monday, after French leader Emmanuel Macron beat far-right challenger Marine Le Pen in the first round of presidential voting.

China’s markets and oil prices gained ground as signs emerged that some of the COVID-19 restrictions were easing in financial hub Shanghai.

A relaxation of China’s regulations on the gaming sector also gave investors heart after a multi-year crackdown on parts of the country’s technology industry.

The European Union has yet to agree any embargo on Russian oil over the war in Ukraine, but some foreign ministers have said the option is under discussion.