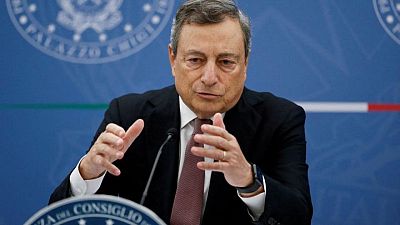 ROME – Italy has reduced its estimates for the economic growth impact of European Union funds and reforms connected with its Recovery Plan, a Treasury document showed on Friday, saying the cash will be spent more slowly.

Italy is eligible for more than 200 billion euros ($216.82 billion) in grants and cheap loans from the EU’s Fund, making it the biggest beneficiary of the 750 billion euro kitty set up to help the bloc’s 27 countries recover from the economic fallout of the COVID-19 pandemic.

The Treasury’s annual Economic and Financial Document (DEF) said the government now expects to be able to spend the money less quickly than it envisaged when it sent its Recovery Plan of investments and reforms to Brussels in April last year.

Under the latest forecasts, gross domestic product (GDP) will be 3.2% higher in 2026 than it would have been without the Recovery Fund. That compares with a previous estimate of a 3.6% increase.

The DEF also says that of a complementary Italian growth-boosting fund worth 30.6 billion euros, almost a third (9.5 billion euros) will now not be spent until after 2026.

The revisions come as the war in Ukraine worsens the economic outlook throughout the euro zone.

The DEF slashed Italy’s GDP growth estimate for this year to 3.1% from a 4.7% projection made in September.

That projection remains more optimistic than those of several independent forecasters. Employers’ lobby Confindustria has estimated 2022 growth of just 1.9%.

Italy, whose top two banks have sizeable exposure to Russia and which relies heavily on Moscow for its energy needs, could see its growth outlook deteriorate further if the West ramps up its sanctions against Russia over its invasion of Ukraine.

In a worst-case scenario, assuming an embargo on Russian gas and oil until 2023 and serious shortages in supplies, the DEF estimates growth of just 0.6% in 2022 and 0.4% next year.