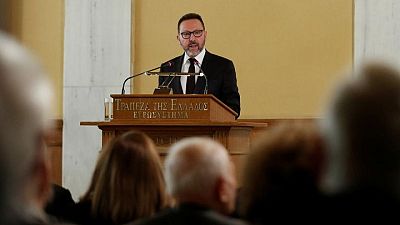 ATHENS – Greece’s economy is seen expanding by 3.8% this year under a baseline scenario, a slower pace than a previous projection of 5.0%, the head of the central bank told its annual meeting of shareholders on Thursday.

“The war in Ukraine is a new, major exogenous supply-side shock to the global economy that also affects, through various channels, aggregate demand,” Bank of Greece Governor Yannis Stournaras said.

He said this was occurring at a very “critical time”, when economies were rebounding from the health crisis and a severe recession.

Stournaras said Greece’s main economic policy objectives this year should be to maintain growth momentum and keep up efforts to regain investment grade.

“The latter should become a national goal,” he said.

The economy’s performance will depend on the extent and duration of the shocks in international prices of energy and food, as well as deterioration in confidence and financial market turmoil, Stournaras said.

Under the central bank’s baseline scenario, consumer inflation is projected at 5.2% this year while a further increase to 7.0% is projected under an adverse scenario.

“Although the main drivers of growth this year are domestic demand and tourism, there is significant uncertainty: the negative impact of inflation on households’ real disposable income will drag down private consumption,” Stournaras said.

Greece’s annual consumer inflation accelerated to 7.2% in February, hitting its highest in 25 years on the back of surging costs of energy, housing and transport.