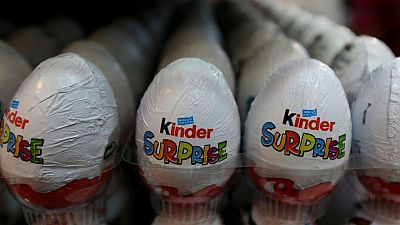 BRUSSELS – Europe’s health agency said on Wednesday it was investigating dozens of reported and suspected cases of salmonella linked with eating chocolate in at least nine countries.

Italian confectionary group Ferrero recalled several batches of Kinder Surprise chocolate eggs and other products from Spanish shelves on Wednesday, after similar moves in Britain and Ireland on Monday.

Ferrero described the recalls as precautionary and said on Wednesday that no Kinder products released to the market had tested positive for salmonella.

“The outbreak is characterised by an unusually high proportion of children being hospitalised, some with severe clinical symptoms such as bloody diarrhoea,” the European Centre for Disease prevention and Control (ECDC) said.

The agency did not mention Ferrero or any other company in a statement, but warned on Wednesday that the reported cases were mostly among children under 10 years old.

The agency later said that Kinder chocolate eggs were involved but did not clarify whether the problem concerned exclusively those products.

Nestle, the Swiss confectionery company, said it had recalled no products in this context. Rival Lindt & Sprunegli was not affected by the current health crisis.

Britain has the highest number of incidents with 63 confirmed cases as of April 5, the ECDC said, adding that other countries with probable or confirmed cases are France, Ireland, Belgium, Germany, Luxembourg, the Netherlands, Sweden and Norway.

The European Union health agency said it was investigating, together with the European Food Safety Authority (EFSA), 134 confirmed or probable cases of salmonella.

Product recalls have been launched in several countries, including Belgium, France, Germany, Ireland, Luxembourg and Britain, the EU agency said.