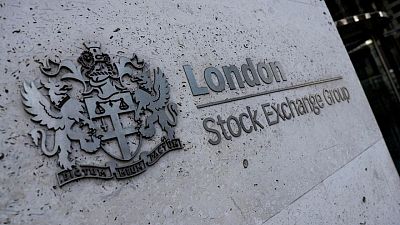 – Britain’s FTSE 100 slid on Thursday, lagging its continental peers, as oil major Shell dropped after it flagged a bigger writedown following its decision to exit Russia.

The blue-chip index edged down 0.4% and the domestically focussed midcap index slipped 0.3%, while gains in defensive sectors propped up euro zone markets.

Shell fell 2.2% as it will write down up to $5 billion related to its Russia exit, more than previously disclosed.

Broadly, economy-linked sectors such as oil & gas, miners and banks declined on concerns about a slowdown in economic growth following hawkish signals from the U.S. Federal Reserve and due to the ongoing Ukraine conflict that has elevated inflation.

“The Fed minutes confirmed the feeling in markets, which was that 50 bp rate hikes were on the table and that quantitative tightening will begin in May even though the market believes economic growth will be impacted,” said Edward Park, chief investment officer at Brooks Macdonald Asset Management.

Another big decliner was housebuilder Countryside Properties, which tumbled 13.4% as it warned of lower annual profit after a business review flagged several issues, including costly expansions and manufacturing losses.

“We’ve got a fairly conservative view towards the housing sector. If we do see a turndown in consumer confidence, that will impact housing and if actually consumer demand remains quite robust and allows the BoE to carry on raising rates, that’s also going to be negative for house prices,” said Park.

Among gainers, 888 Holdings surged 25.7% after the gambling firm and U.S.-based Caesars Entertainment cut the deal value of William Hill’s non-U.S. assets, allowing a smaller equity raise to fund the deal.

Peer Entain slipped 1.9% even as it reported a surge in first-quarter total net gaming revenue.