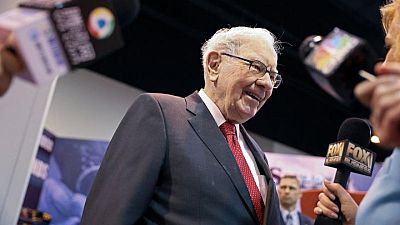 -Berkshire Hathaway Inc disclosed on Wednesday that it has purchased nearly 121 million shares of HP Inc, the latest in a series of large investments by the conglomerate controlled by billionaire Warren Buffett.

The investment gives Berkshire a roughly 11.4% stake in HP, worth about $4.2 billion based on the personal computing and printing company’s closing stock price on Wednesday of $34.91.

Shares of HP rose 9.9% to $38.38 in after-hours trading after Berkshire disclosed the stake in filings with the U.S. Securities and Exchange Commission.

HP, based in Palo Alto, California, had about 1.06 billion shares outstanding as of Jan. 31.

Neither HP nor Berkshire immediately responded to requests for comment.

The HP stake is Berkshire’s third big investment since Feb. 26, when Buffett said in his annual shareholders letter that “internal opportunities deliver far better returns than acquisitions” and little “excites us” in equity markets.

On March 21, Berkshire agreed to buy insurance company Alleghany Corp for $11.6 billion in cash, adding to its portfolio of insurers including Geico.

Earlier in March, Berkshire revealed a 14.6% stake in Occidental Petroleum Corp, which cost well over $6 billion to amass.

Before announcing the Alleghany purchase, Buffett had gone six years without a major acquisition, leaving Berkshire with $146.7 billion of cash and equivalents. Buffett has pledged to keep at least $30 billion of cash on hand.

Berkshire did not say whether Buffett or his portfolio managers Todd Combs and Ted Weschler are responsible for the HP stake, though Buffett normally handles larger investments.

Buffett is chiefly responsible for Berkshire’s stake in Apple Inc, calling the iPhone maker one of the “Big Four” companies accounting for much of his Omaha, Nebraska-based conglomerate’s value.

The other “Big Four” companies are Berkshire’s insurers, the BNSF railroad, and Berkshire Hathaway Energy.