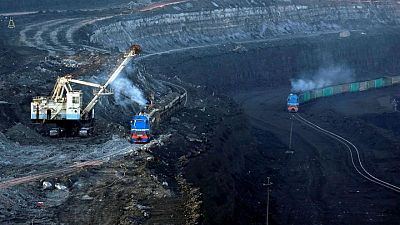 LONDON – The European Commission will propose to EU nations on Tuesday sweeping new sanctions against Russia, including banning imports of coal, an EU source told Reuters.

This comes at a time of uncertainty about future gas deliveries from Russia to the European Union later this month after the Kremlin’s demand that buyers start paying Russian gas giant Gazprom in roubles.

Several EU countries are heavily reliant on Russian coal imports, as well as gas, and have increased coal imports from Russia in recent months due to the spiralling cost of gas.

The EU depends on Russia for around 45% of its coal imports, 45% of its gas imports and around 25% of its oil imports, according to the European Commission website.

The EU imports almost 70% of its thermal coal from Russia, which is used in power and heat generation, according to Brussels-based thinktank Bruegel. Russian metallurgical coal, used in iron and steel making, accounts for between 20% and 30% of the EU’s coal imports.

Germany, Poland and the Netherlands are Europe’s biggest consumers of Russian coal.

The consumption and domestic production of so-called hard coal, mainly used for heating and with the highest carbon content, in the EU has been declining over the past few years, due to more stringent targets for combating pollution and global warming.

But that has also meant that coal imports have increased to more than 60% of domestic consumption, raising questions about the availability of hard coal for the EU in case of a major disruption, such as an energy embargo on Russia, Bruegel said.

Due to very high gas prices, many EU countries have been switching to coal from gas since the middle of last year. Russian coal merchants have proved to be the winners as European buyers, nervous a feared Russian invasion of Ukraine could lead to disrupted gas supplies, stocked up on the fuel.

There is concern that Russian gas supplies will stop during April due to EU governments’ refusal to give into President Vladimir Putin’s demands for payments in roubles. Germany is among some countries which have already said they could increase coal use to replace Russian gas.

If Russian coal imports are banned, several European countries could face even more severe energy crunches when heating demand increases next winter, as well as higher bills for consumers and industry, which are already struggling.

Germany in Jan-Oct 2021 received 53% of its coal from Russia, followed by 17% from the United States, 13% from Australia, 5% from Colombia and smaller shares from Canada, Poland, South Africa and the Czech Republic.

Poland imports around 20% of its thermal coal, mostly from Russia. Last week, the Polish government said it would ban those imports from this month or next. Australia, South Africa and Canada are listed by the government as suppliers that could replace Russian coal imports to Poland.

“In principle, shipments from countries that have reduced exports to the EU are still largely available to substitute for Russian coal,” said analysts at Bruegel.

The chairman of the Association of Coal Importers in Germany said earlier this year: “In a few months, hard coal imports from Russia can be completely replaced by other countries. In particular from the USA, Colombia and South Africa but also from Australia, Mozambique and Indonesia.”

Consultancy Wood Mackenzie, however, has said there is limited global supply availability to substitute high-grade coal from Russia.

Like the scramble for gas on the global market to replace Russian supplies, the EU would also be competing with the world’s biggest consumer China and other Asian markets for coal.

Although it is still more expensive to burn gas to produce power than coal, thermal and metallurgical coal prices have reached all-time highs this year.

The front-month physical thermal coal price for European delivery reached a record high of $507/tonne on March 8 and last traded at $273/tonne on April 4.