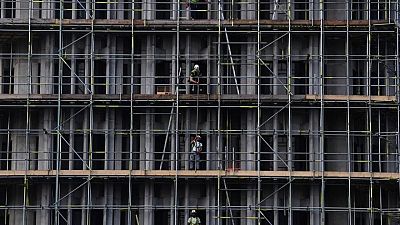 The S&P Global/CIPS construction Purchasing Managers’ Index (PMI) was unchanged in March at 59.1, its joint-highest reading since June 2021 and bucking economists’ average forecast in a Reuters poll for a fall to 57.8.

The wider all-sector PMI, which includes previously released services and manufacturing data, rose to its highest since June 2021 at 60.7, up from February’s 59.8.

But the prices of raw materials rose by the most in six months, reversing a previous slowdown, and some builders feared that a broader price surge in the economy would lead to customers scaling back projects later in the year.

“Intense inflationary pressures appear to have unnerved some construction companies. Business optimism slipped to its lowest since October 2020 on concerns that clients will cut back spending,” Moore said.

Britain’s budget watchdog forecast last month that inflation would reach a 40-year high of 8.7% later this year and that households’ disposable income would fall by the most in real terms since at least the late 1950s.

At the same time, financial markets predict the Bank of England will raise interest rates to 2% by the end of the year, up from 0.75% now, which would raise the cost of mortgages for new home purchases.

Housing growth slowed in March, in contrast to growth for commercial projects – which gained from the easing of COVID-19 restrictions – and large-scale infrastructure work.

The most recent official data showed that construction volumes in Britain expanded by 1.1% in January from December and were the highest since September 2019.