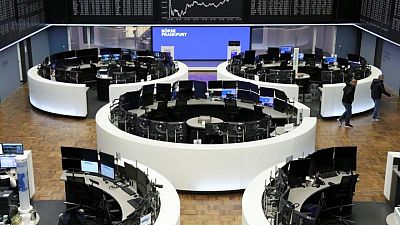 By Susan Mathew and Anisha Sircar

– European shares edged higher on Tuesday as investors awaited a batch of fresh sanctions on Moscow, while France’s blue-chip index slumped after opinion polls for presidential elections due later this month tightened.

French markets woke up to the risk of far-right candidate Marine Le Pen winning this month’s elections against Emmanuel Macron after Le Pen captured 48.5% of voter intentions in a poll on Monday – the highest she has ever notched.

The pan-European STOXX 600 index was up 0.2%, paring back some gains made earlier in the day, while France’s benchmark CAC 40 index lost 1.3% to clock its worst day in nearly a month.

“At best, (Le Pen) would undermine and frustrate European policymaking and at worst, seek to dismantle EU structures from the inside… If polls continue to move in her favour, investors are likely to become much more concerned,” Hinds said.

The spread between the yield of 10-year French and German government bonds – the premium demanded by investors to hold French debt – rose to 54 basis points, levels unseen since the COVID-19 crash of 2020.

In response to civilian killings in a Ukrainian town, the European Union proposed sweeping new sanctions, including a ban on coal imports, which, if approved, would bar Russian imports worth 9 billion euros and exports to Russia worth 10 billion euros.

European utilities outperformed on the day, gaining 2.3%. Gains across renewables also boosted the Spanish blue-chip index IBEX, which was up 1.2% at more than six-week highs.

“We see the evolution of regulation at the EU level as supportive to the sector, both in terms of renewables development and possible adjustments to the market design,” CS said in a note.

The STOXX 600 index has recovered about 14% from lows hit after Russia’s “special military operation” into Ukraine began, but it is still down around 5% for the year.

Aareal Bank rose 3.4% after a buyout group seeking to take over the German lender in a $2.2 billion deal said it had secured commitments from shareholders to tender around 37% of stock after it raised its offer price again.