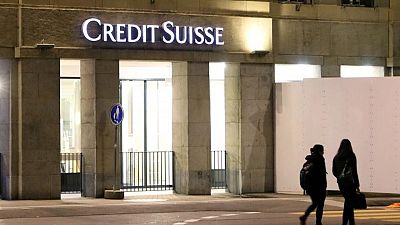 ZURICH -Credit Suisse’s board will leave managers potentially liable for the collapse of its Greensill-linked funds when it asks shareholders to grant them a discharge for other activities, the bank said on Wednesday, as a group of investors pushed for a special audit.

Credit Suisse racked up a 1.6 billion Swiss franc ($1.7 billion) loss in 2021, partly as a result of a $5.5 billion hit from the implosion of investment fund Archegos which hit the bank that March.

Its reputation was also damaged by the collapse of $10 billion in supply chain finance funds (SCFF) linked to insolvent British financier Greensill that same month, for which it is still trying to recover investor funds.

The bank conducted inquiries into both matters, publishing a damning report in July on a “lackadaisical” attitude toward risk and “a lack of accountability” behind the Archegos loss, but in a surprise move, said it would not publish its Greensill report in January.

Now, pension fund adviser Ethos Foundation and seven Swiss pension funds are pressing forward with demands for more information about the affair, asking shareholders to approve a special audit examining the bank’s actions in relation to both Greensill as well as the so-called “Suisse Secrets” published in February.

“Due to the ongoing process to recover investors’ funds, the legal complexities of the SCFF matter, as well as an ongoing regulatory investigation by FINMA, the board does not intend to publish the related report,” the bank said on Wednesday. “It therefore does not recommend proposing discharge with respect to this matter until the related processes are largely concluded.”

Under Swiss corporate rules, directors can be held responsible for wilful or grossly negligent violations of their duties, with shareholders asked each year to free them from legal liabilities for the previous year.

Approving the vote waives the directors’ or management’s liabilities, but applies only to facts that have been disclosed to shareholders and the claims of the company and shareholders who approved it.

Credit Suisse withdrew an agenda item from its 2021 AGM asking shareholders to approve management’s performance as it conducted investigations into the two scandals.

Now, following investor pushback, it said it would ask shareholders to grant executives and board members a discharge for any liabilities for 2020 and 2021 at its AGM on April 29, but omit matters surrounding the Greensill-linked funds.

It asked shareholders to reject Ethos’ proposal for a special audit, saying it had answered questions from the shareholder group seeking more information, which it would make available on its website during the week of April 4.

A special audit would “at this stage be detrimental to Credit Suisse and that additional, related disclosure would prejudice the outcome of the recovery processes in particular”, Credit Suisse said.

Ethos, however, said it found Credit Suisse’s response insufficient and therefore had decided to press ahead with a vote at the AGM.

Ethos also requested that the audit scrutinise the bank’s response to findings published by a group of media outlets in February, who reported the Swiss bank had managed accounts for human rights abusers, fraudsters and businessmen who had been placed under sanctions.