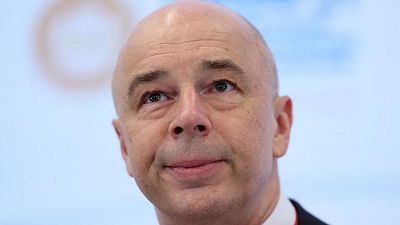 -Russian Finance Minister Anton Siluanov said on Wednesday that a proposed sovereign Eurobond buyback would stop discrimination against Russian bondholders, who he said were not able to access funds sent to settlement system Euroclear, Interfax reported.

Russia has offered to buy back dollar bonds maturing next week in roubles in a move seen by analysts as helping local holders of the $2 billion sovereign issue receive payment, while easing Moscow’s hard-currency repayment burden.

The finance ministry offer on Eurobonds maturing on April 4, Russia’s biggest debt payment this year, follows Western moves to tighten sanctions against the country over its actions in Ukraine and to freeze Moscow out of international finance.

“This is because we see money coming into Euroclear successfully reaching foreign holders, money on our debts,” Interfax quoted Siluanov as saying. “And settlements are frozen for Russian resident holders.”

Euroclear did not immediately respond to a request for comment.

“So in this case we have offered to settle directly with our residents in roubles, so as not to discriminate against our security holders and have proposed the possibility of buying back our debt from Russian residents,” Siluanov added.

The finance ministry did not say how much of the issue is owned by foreign investors, but a Russian source familiar with the process said that the bulk of the Eurobond due on April 4 is split among Russian holders.

The rouble initially crumbled after the sanctions, plunging by as much as 40% against the dollar since the start of 2022, but has since recovered some ground and was trading at around 83 to the dollar on Wednesday.

Although that is some way off levels of around 75 before Russia began what it calls a special operation in Ukraine, there were signs that the buyback may be popular among Russian bondholders.

“Some Finam clients have those Eurobonds in their portfolio and they plan to take part in the finance ministry’s buyback,” said Dmitry Lesnov, head of Finam brokerage’s client service development department.

“The benefit of this decision may be that clients receive certainty on their positions and will be able to receive payments on assets, in spite of restrictions, introduced by European depositories Euroclear and Clearstream,” Lesnov said.

The bondholders should submit requests to sell their holdings to the National Settlement Depository between 1300 GMT on March 29 and 1400 GMT on March 30.

Bondholders who do not sell their Eurobonds under the voluntary offer will be paid in U.S. dollars on April 4, another source familiar with the buyout process said. Russia has made other dollar coupon payments earlier this month.