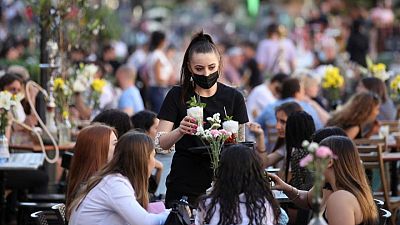 ROME – Italy plans to confirm its 2022 budget deficit target at 5.6% of national output, two sources close to the matter told Reuters, despite coalition pressure to sharply hike borrowing as the growth outlook deteriorates.

Mario Draghi’s government is preparing to slash its growth forecast for this year to 2.8% from a previous 4.7% goal made in September, the sources said, amid surging energy costs and turmoil linked to Russia’s invasion of Ukraine.

In confirming the 5.6% deficit goal, Draghi is helped by the fact that on current trends the deficit is on track for 5.3%, according to the sources, allowing potential leeway of 4 billion to 5 billion euros ($4.4 billion to $5.5 billion) of additional spending without increasing the current target. Last year’s deficit came in at 7.2%.

The new figures will be published by the Treasury next week in its annual Economic and Financial Document (DEF).

Draghi has been facing pressure from his ruling coalition to approve a major new spending package to support growth in the euro zone’s third largest economy, and some party chiefs may keep seeking to overcome his intransigence.

The figures are still subject to marginal changes as the Treasury awaits final data on public finances for the fourth quarter of 2021, to be published by national statistics bureau ISTAT on April 5, the sources said.

For 2023, Rome now sees GDP rising by around 2.5%, the sources said, asking not to be named due to the sensitivity of the matter. The new forecast is down from an official goal of 2.8% made in September.

The growth forecasts are based on an unchanged policy scenario and so do not include the impact of new supportive measures to be funded through the budget leeway.

For this reason, the final GDP targets will be somewhat more ambitious.

This year did not begin well. Italian industrial output dived 3.4% in January from the month before, its steepest fall for more than a year, even before the headwinds generated by the Ukraine war. Consumer and business sentiment both slumped in March.

The government has so far has set aside more than 19 billion euros since last July to try to soften the increase in energy and fuel prices for firms and households.

Italy, whose top two banks have sizeable exposure to Russia and which relies heavily on Moscow for its energy needs, could see its growth outlook deteriorate further if the West ramps up its sanctions against Russia.

The Kremlin has warned that Rome could face “irreversible consequences” if it follows this path.