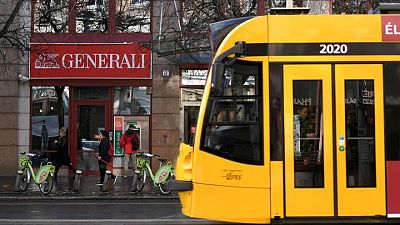 MILAN – A strategic plan for Generali backed by rebel shareholder Francesco Gaetano Caltagirone goes in the right direction by setting up the company for growth, another of the top investors in Italy’s biggest insurer was quoted as saying.

Leonardo Del Vecchio, the billionaire founder of eyewear giant Luxottica and the third-largest investor in Generali behind Caltagirone, told Bloomberg in an interview that candidates put forward for Generali’s board by Caltagirone were “highly competent and well balanced.”

The duo unveiled their strategic plan for Generali, dubbed “Awakening the Lion” in a reference to the insurer’s symbol, on Friday in Milan.

Del Vecchio, 86, expressed appreciation for the plan saying it reflected “a long-term entrepreneurial vision that doesn’t just look for dividends but also at the need to grow the company.”

Del Vecchio holds around 8% of Generali and is considering further raising the stake, Bloomberg reported quoting sources familiar with the matter.

Generali’s board, with backing from the company’s single largest shareholder Mediobanca, has proposed handing Donnet a third term as CEO when shareholders vote to name a new board on April 29.

Donnet in December presented his own three-year strategy for Generali, hiking dividends and announcing the first share buyback in 15 years.

The alternative plan Donnet’s challengers unveiled on Friday targets much higher profit growth to be achieved in part through mergers and acquisitions, as well as cost-cutting.

Del Vecchio said he hoped to see “major and transformative transactions” at Generali, which a chairman “with operating capabilities” could help to achieve.

The Luxottica founder also backed the choice of Cirina, who was fired by Generali on Monday for alleged breach of contract, as CEO because he came from within the group.

Finally, he took aim at Mediobanca, in which he is in turn the single biggest investor with nearly 20%, saying Generali’s growth may have been “held back by a shareholder that is only interested in extracting dividends.”

Mediobanca derives a third of its profits from its near 13% Generali stake and Del Vecchio in the past has criticised what he deemed an excessive reliance on the Generali contribution.

To counter the two tycoons’ weight at the April 29 AGM Mediobanca has borrowed shares in Generali to reach a 17% voting stake, a move which also drew criticism from Del Vecchio.