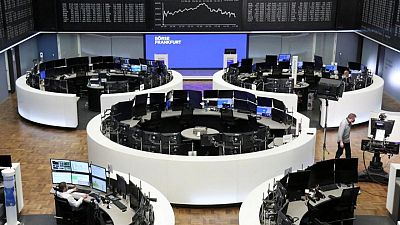 By Shreyashi Sanyal and Anisha Sircar

– European shares retreated after three straight sessions of gains on Wednesday, as investors paused to take stock of the outcome of Russia-Ukraine peace talks.

The STOXX 600 closed at levels hit before the conflict on Tuesday after peace talks between Russia and Ukraine yielded the most tangible sign of progress toward negotiating an end to the war.

“(The recent) relief rally, which has been all about the possibility of an agreement between Russia and Ukraine, has fizzled out today,” said Danni Hewson, financial analyst at AJ Bell.

Russian forces bombarded the outskirts of Kyiv and a besieged city in northern Ukraine on Wednesday, a day after Moscow promised to scale down operations there.

The pan-European STOXX 600 lost 0.4%, while commodities-exposed sectors were in positive territory. European miners and the energy sector rose 2.4% and 3.3%, respectively, as prices of oil and metals rebounded. [O/R] [MET/L]

Given the rally in commodity prices since the onset of the war, energy stocks are up 4.7% this month, while miners have added more than 6%, broadly outperforming the STOXX 600’s 1.6% gain in the same period, and the German DAX‘s 1% rise.

“If the standoff intensifies and Moscow does turn off gas supplies, Germany is going to be in major trouble, and trying to get gas from other places will be very difficult. There will be rationing and issues of supply, which European markets are extremely concerned about today,” Hewson said.

Germany triggered an emergency plan to manage gas supply on Wednesday, an unprecedented move that could see the government ration power if there is a disruption in gas supplies from Russia.

Frankfurt’s DAX index was the biggest decliner among regional markets, shedding 1.5% to record its worst day in nearly three weeks.

Fuelling investor worries, data and warnings from policymakers made clear that Europe’s economy at large is increasingly strained by Russia’s war in Ukraine as growth stalls, confidence plummets and inflation soars.

Among individual stocks, BioNTech advanced 5.6% after saying it has expanded a clinical trial programme to develop new vaccines to tackle the Omicron COVID-19 variant as it reported a profit boost from its first-generation shot.