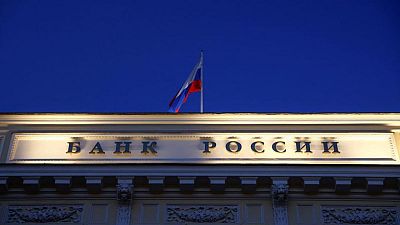 -Restrictions Russia’s central bank imposed in the past month on capital flows out of the country were a tit-for-tat move in response to part of its reserves being frozen by Western countries, the regulator said on Friday.

Western sanctions imposed on Russia for what Moscow calls “a special military operation” in Ukraine have limited the central bank’s ability to support the rouble currency with dollars and euros held in its foreign currency and gold reserves.

“In response to the freezing of part of Russia’s reserves, Russia also introduced restrictions on the movement of funds that could be transferred to unfriendly countries by a comparable amount,” the central bank said in its first detailed explanation of the reasoning behind its decisions.

These included capital flow restrictions, a ban on the sale of securities by foreign investors, a ban on withdrawal of their funds from the Russian financial system, and the need to obtain special state approval to make payments to debt holders from “unfriendly countries”.

The sanctions froze around $300 billion of Russia’s $640-billion gold and forex reserves, its finance ministry said earlier in March.

Russia holds part of the reserves in the Chinese yuan and gold – 73.9 million troy ounces of the precious metal worth $132 billion as of Feb. 1.

In recent years, the central bank has viewed both the yuan and gold as part of its reserves that would protect the economy in case of geopolitical crises and Western sanctions.

Russia “has therefore increased the share of gold and the Chinese yuan to almost half of its reserves in recent years,” it said on Friday.

The United States, however, said on Thursday that gold-related transactions involving Russia could be sanctionable by U.S. authorities, effectively limiting the central bank’s ability to use the gold reserves as well.

The central bank did not comment in detail about its ability to use its gold reserves, but said that they were currently on Russian territory.