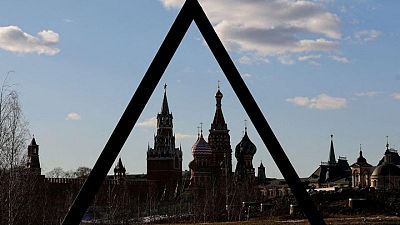 LONDON/NEWYORK – Global banks including Citigroup Inc, JPMorgan Chase & Co and Societe Generale face pressure to commit to remaining as custodian banks in Russia, as rivals and funds fret they may lose services critical to future investment in the country.

Traders, bankers and executives from three other financial institutions told Reuters they were seeking or had sought reassurances on behalf of clients on each bank’s long-term plans for these businesses, which clear, settle and safeguard billions of dollars of Russian holdings.

Custodian banks have departments that look after assets for clients in return for fees.

One London-based banking source, speaking anonymously to respect confidentiality of their large global fund client, said they were in weekly contact with senior executives at Citibank Moscow on the status of their custodian business.

The source said their client was waiting to trade Russian equities when the Moscow Exchange (MOEX) reopens, but they needed the reassurance of having a Western custodian in place.

According to the source, the Citigroup executives said they would serve clients for as long as sanctions permitted.

A source with knowledge of Citi said that major U.S. and international businesses in Moscow use that bank and cutting those customers off would damage client relations. Other bankers said it is crucial to the industry that Citi, a key player, keep operating in Moscow.

A second banker, based in New York, said he had sought assurances from SocGen that they would “stay on the ground” so that his bank could meet custody obligations to clients. Executives at SocGen provided assurances that they would, at least in the near term, the source said.

Citigroup and SocGen, the French parent of Rosbank, have already announced plans to dramatically pare operations in Moscow as part of a sweeping programme of Western sanctions aimed at isolating Russia economically following its invasion of Ukraine.

Both banks have said they will aid their clients with the complex tasks of unwinding or reducing exposures to Russia, and said withdrawals will take time to execute.

But neither has made a public statement on the long-term status of their custodian services, leaving some clients nervous for the future.

In an emailed statement, a spokeswoman for SocGen said the group was “conducting its business in Russia with the utmost caution and selectivity, while supporting its historical clients.”

SocGen “is rigorously complying with all applicable laws and regulations and is diligently implementing the necessary measures to strictly enforce international sanctions as soon as they are made public.”

The bank declined to comment specifically on its custody business in Russia.

JPMorgan Chase & Co also provides similar custody services from its Moscow outpost. The bank has received queries from clients seeking assurances that custody services will continue to be provided, according to a source familiar with the matter. It has previously said it will continue acting as a custodian to its clients.

Bank of New York Mellon Corp has also said it will continue to provide custodian services in Russia.

If banks decide to mothball their custody services in Moscow, many Western investors already holding Russian stocks or bonds would have to look elsewhere for a bank to hold those assets, while others keen to exploit a financial market or economic rally when sanctions are lifted could find it harder to pursue those plans.

SocGen, France’s third-largest bank, warned stakeholders on March 3 that it could be stripped of its property rights to its business in Russia in a “potential extreme scenario.”

Citi, meanwhile, originally said it would operate its Russian business on a more “limited basis” in the wake of the war, which President Vladimir Putin has called “a special military operation.”

But by March 14, it said it would accelerate and expand the scope of that retreat by giving up its institutional and wealth management clients in Russia.

Besides transaction services, many of the Moscow-based custody teams are providing add-ons like language translation of central bank documents that are also highly valued by Western clients, the source said.

Russia’s central bank said separately on Wednesday that some stock market trading would resume on Thursday, with 33 securities set to be traded on the Moscow Exchange for a limited period of time and with short selling banned.

The challenge for banks in meeting obligations to clients in Russia is getting tougher, and might become even more daunting if sanctions are tightened, with the one-month anniversary of the invasion falling this week.

Another New York-based banker described the business of ensuring clients are in compliance with sanctions in relation to securities holdings as a “logistical nightmare” and said his firm had hired 20 new compliance staff in recent weeks.

U.S. asset managers including Vanguard and Capital Group Companies Inc, which manages the American Funds franchise popular among millions of mom and pop retirement savers, have also disclosed large exposures topping billions of dollars, according to the most recent portfolio information available.