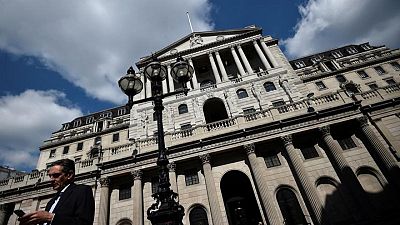 LONDON – Britain’s 2 trillion-pound ($2.64 trillion) government bond market is in good shape to take whatever 2022 might throw at it, the head of the country’s debt agency told Reuters on Wednesday.

Earlier the Debt Management Office said it planned to issue 124.7 billion pounds of gilts in the coming 2022/23 financial year – less than most primary dealers had expected in a Reuters poll that pointed to issuance of 147 billion pounds.

New forecasts presented by British finance minister Rishi Sunak on Wednesday showed borrowing in the financial year just ending is on track to be much lower than previously expected, reducing debt issuance needs for the coming year.

DMO Chief Executive Robert Stheeman said the remit had been designed to be as market-friendly as possible after a difficult time for investors trying to navigate choppy financial markets, exacerbated by Russia’s invasion of Ukraine.

Stheeman said the gilt market had functioned well, even with the Bank of England – the market’s biggest buyer over the last decade – moving to the sidelines as it begins unwinding the 875 billion pounds of gilts it bought via quantitative easing.

“All that is a challenging backdrop for all markets. Our market, I think, has proved very resilient. You’ve seen smooth price adjustment, albeit with some big moves on certain days.”

The BoE has already started to reduce its stock of gilts by allowing maturing bonds to roll off its balance sheet and has said it will consider active sales when the Bank Rate reaches 1%, from 0.75% presently.

Asked how investors would deal with that, Stheeman said he was reassured that the gilt market was probably the most liquid among European government bond markets.

“None of us really knows what the path of monetary policy will be. We don’t know what’s going to happen globally, politically, economically. But given those uncertainties we at least have the comfort of one of the best-functioning bond markets in the world,” Stheeman said.

In 2022/23 the DMO plans to issue 10 billion pounds of green gilts – the proceeds of which are ring-fenced for environmentally friendly projects such as offshore wind farms.

Rather than launching new bonds, the DMO said it planned to build up its two existing green gilts issued last year: the July 2033 bond, and what was at launch the longest-dated sovereign green bond in issue, the July 2053 bond.

“We are deliberately focusing in the coming year on building those up to help make sure that they mirror other benchmark bonds in terms of liquidity, in terms of how tradable they are,” Stheeman said.