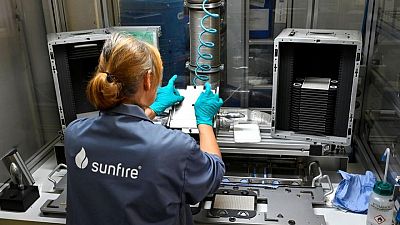 Sunfire shareholders include Total and Neste.

Construction of the plant in Harjavalta, southwest Finland will start later this year, P2X Solutions said. It is investing 70 million euros ($77.14 million) in total in the facility, a 20 megawatt hydrogen and synthetic methane production plant, it said.

So-called green hydrogen is produced by splitting water by electrolysis and is seen as a key power source that can reduce pollution and increase energy self-sufficiency in Europe.

At P2X‘s plant the hydrogen will be separated from water in a completely emission-free process by electrolysis using renewable electricity, the company said.

“Our goal is to build 1,000 MW of electrolysis capacity over the next 10 years, and the design of subsequent plants has already begun,” P2X Solutions Chief Executive Herkko Plit said in a statement.

P2X and Sunfire announced their deal in a joint statement. They gave no financial value for the equipment Sunfire will provide to the Finnish plant but said the electrolyser would be the most significant single investment in the production facility.