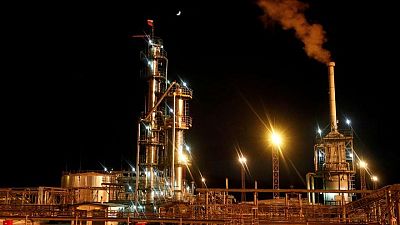 -Oil stumbled on Tuesday as the dollar strengthened and it looked unlikely that the European Union would pursue an embargo on Russian oil, a day after prices jumped 7% and also rose earlier in the session.

European Union foreign ministers are split on whether to join the United States in banning Russian oil. Some countries, including Germany, say the bloc is too dependent on Russia’s fossil fuels to withstand such a step.

“It’s pretty clear that the German economy will seize up so the EU is backing away from a Russian ban,” said John Kilduff, partner at Again LLC in New York.

A strong dollar makes crude more expensive for other currency holders and tends to weigh on risk appetite.

“The word ‘transitory’ regarding inflation is a distant memory, chiefly due to rising commodity prices,” said Tamas Varga of broker PVM. “Central banks, led by the Federal Reserve, stand ready to increase the cost of borrowing significantly.”

Oil prices drew support from threats to supply as Yemen’s Iran-aligned Houthi group attacked Saudi energy and water desalination facilities. On Monday, Saudi Arabia said it would not bear responsibility for any global supply shortages after the attacks by the Houthis, signaling growing Saudi frustration with Washington’s handling of Yemen and Iran.

The oil market will watch the latest round of U.S. inventory data. Analysts expect no change in crude oil stocks. The American Petroleum Institute, an industry group, issues its supply report on Tuesday. [EIA/S]