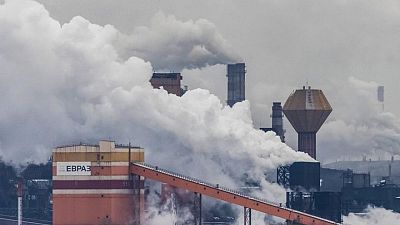 LONDON – Evraz, the Russian steelmaker whose biggest shareholder is Roman Abramovich, said on Monday a bond coupon payment of nearly $19 million had not been received by its principal paying agent, adding it believed the issue was linked to sanctions.

The London-listed company said there were no reasons for it to default, adding that the issuer had sufficient liquidity to complete the coupon payments.

It said the paying agent for the coupon, Bank of New York Mellon, had told Evraz it had not received the funds, which remained “blocked for compliance” at Evraz’s correspondent bank, Societe Generale New York.

SocGen in NY did not immediately respond to request for comment.

The coupon is on Evraz’s dollar bond maturing in March 2023. The issue last traded on Monday at 64 cents in the dollar

Britain imposed sanctions on Abramovich, the owner of Chelsea soccer club, on March 10, freezing his assets and preventing him from travelling to Britain.

Evraz reiterated its position that Abramovich, who owns a 28.64% stake, does not have effective control of the company, and it believes that it is neither designated nor sanctioned.

Evraz said it had sought clarity and confirmation from Britain’s Treasury and Foreign, Commonwealth and Development Office about the matter.

Britain’s Index provider FTSE Russell said last week it would eject Evraz, after many brokers refused to trade its shares, which remain suspended.