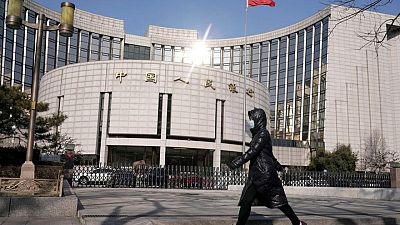 SHANGHAI – China kept its benchmark interest rate for corporate and household lending unchanged on Monday, as expected, although analysts say the case for monetary stimulus is building amid mounting external risks to an already slowing economy.

Just over half the traders and analysts surveyed in a snap Reuters poll last week expected China to keep both rates unchanged.

The pricing of the LPR is loosely pegged to the People’s Bank of China (PBOC) medium-term lending facility (MLF) rate, which the central bank kept unchanged last week, dashing expectations for a cut. The LPR is set monthly by 18 banks, who submit quotations of their lending rates by adding a premium over the MLF rate.

Win Thin, global head of currency strategy at Brown Brothers Harriman, said more policy stimulus will be needed to meet the country’s growth target of around 5.5% for this year.

“We see another round of rate cuts coming in early Q2,” he said in a note earlier in the day.

Chinese Vice Premier Liu He, who is responsible for broad economic policy in the country, last week urged the roll-out of market-friendly policies to support the slowing economy.

Liu’s comments reinforced some market expectations for monetary easing in coming months and many expect the PBOC to cut the reserve requirement ratio (RRR) for banks and other policy rates.

“There is no precedent of lowering LPR without a RRR or policy rate cut,” Citi analysts said in a note.

However, some analysts argue lowering interest rates could prompt capital outflows as other major economies, including the United States, start tightening their monetary policy.

The yield gap between China’s benchmark 10-year government bonds and the U.S. Treasury has shrunk to about 65 basis points, its narrowest in three years.

Most new and outstanding loans in China are based on the one-year LPR. The five-year rate influences the pricing of mortgages.