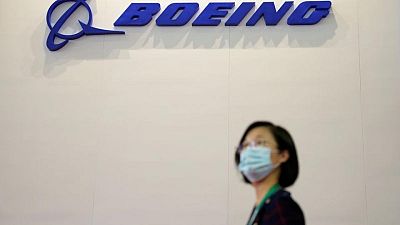 – Shares of U.S. planemaker Boeing Co and its suppliers fell on Monday as a 737-800 aircraft of China Eastern Airlines, with 132 people on board, crashed in the mountains of southern China.

The plane crashed after a sudden descent from cruising altitude. Media reported that rescue workers had found no sign of survivors. The cause of the crash was not yet known. Boeing said it was working to gather more information.

FlightRadar 24 said the jet involved in the accident is six years old. Following the crash, Chinese state media said the airline has grounded its 737-800 fleet, which according to the flight tracking website had 109 such planes.

The popular variant is a predecessor to the Boeing’s 737 MAX, which awaits regulatory approval in China, the world’s largest domestic aviation market.

The 737-800 has a maximum seating capacity of 189 and is equipped with a CFM-56 engine, according to Boeing’s website.

It was not clear immediately if the aircraft involved in the accident had the same engine as airlines are free to choose engines from other suppliers.

The CFM engines are made by a joint venture between General Electric Co and France’s Safran SA. GE shares were down about 1%, while France-listed Safran fell 3%.

The planemaker’s shares fell 4.5% in early trading, while the Chinese airline’s U.S. listed ADRs were down about 9%.

Parts suppliers Spirit AeroSystems Holdings Inc, Hexcel Corp and Triumph Group Inc were down between 1% and 4%.

CFRA Research analyst Colin Scarola said the crash should not technically impact the MAX‘s recertification in China where it has been grounded for three years following the two fatal crashes in Indonesia and Ethiopia.

But he did not rule out the country using the accident as an excuse to delay an approval. “China likely would not admit this is what they are doing. But we certainly think it could happen,” Scarola said.