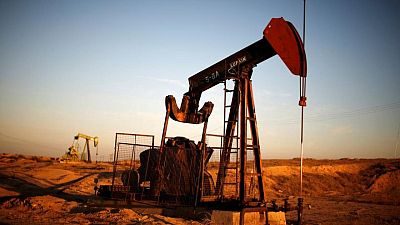 – Oil prices settled higher on Friday, but posted a second straight weekly loss, after a volatile trading week with no easy replacement for Russian barrels in a tight market.

Both benchmark contracts ended the week down around 4%, after trading in a $16 range. Prices hit 14-year highs nearly two weeks ago, encouraging bouts of profit taking since then.

Russia said an agreement had yet to be reached after a fourth day of talks with Ukraine. Some signs of progress had emerged earlier in the week.

“Prior expectations for a Ukraine/Russian cease fire or agreement have faded as Russian military assault on key cities continues in suggesting additional financial sanctions against Russia,” said Jim Ritterbusch, president of Ritterbuch and Associates LLC in Galena, Illinois.

Crude prices have been on a rollercoaster ride, boosted by the supply crunch from traders avoiding Russian barrels and dwindling oil stockpiles. But prices have been pressured by worries about demand with COVID-19 cases surging in China, while stumbling nuclear talks with Iran have been a wild card on the market.

The volatility has scared some investors out of the oil market, which could exacerbate price swings.

Meanwhile, output from the OPEC+ producer group in February undershot targets even more than in the previous month, sources said. The International Energy Agency said oil markets could lose 3 million bpd of Russian oil from April.

U.S. oil producers have also shown considerable constraint since the conflict in Ukraine began. U.S. energy firms this week reduced the number of oil rigs active in the country by 3 to 524 this week, according to energy services firm Baker Hughes.

Consultancy FGE said on-land product stocks at key countries are 39.9 million barrels lower for this time of the year relative to the 2017-2019 average.