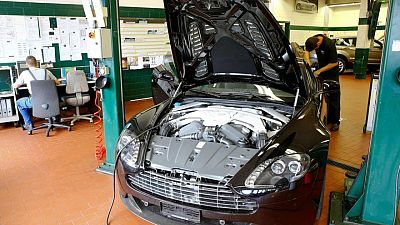 GAYDON, England – Aston Martin on Wednesday launched the final fossil-fuel version of its limited-run powerful V12 Vantage sports car, with every vehicle already snapped up before the British luxury carmaker starts its gradual shift to an electric lineup.

“This V12 Vantage is really a swan song,” Aston Martin executive chairman and investor Lawrence Stroll told Reuters. “There is a history of V12 Vantages at this company that goes back several decades and it will be the last one we make… before we move onto hyrbidisation and electrification.”

Aston Martin plans to launch its first fully-electric vehicle in 2025 and has said that as of 2026 all new car lines will have an electric option.

Fictional secret agent James Bond’s car brand of choice had a tough time after going public in 2018, failing to meet expectations and burning through cash. In 2020, it brought in fresh investment from billionaire Stroll.

The V12 Vantage and the DBX707, a luxury SUV, are the carmaker’s first two new vehicles produced under Stroll.

Aston Martin has been incorporating technology into its cars from shareholder Mercedes-Benz, which increased its stake in the struggling carmaker in 2020.

The carmaker’s petrol-powered V12 Vantage is limited to 333 units globally with a starting price of around $300,000. Stroll said the car was three times oversubscribed.

Since 2007, Aston Martin has crammed its biggest engine into its smallest model to create the Vantage.

The carmaker said the latest and last version “offers an intoxicating combination of magnificent low and mid-range muscularity with searing top-end power” and a top speed of 200 miles (323 km) per hour.