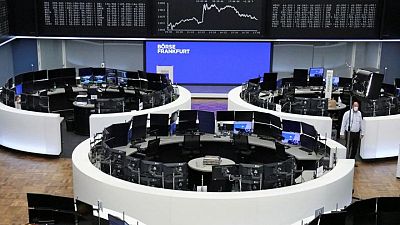 – European stocks rose on Monday, clinging to hopes of diplomatic efforts by Ukraine and Russia to end weeks-long conflict, while shares in Volkswagen surged after the German carmaker doubled its operating profit.

Russia and Ukraine gave their most upbeat assessments following weekend negotiations, even as Russia attacked a base near the Polish border and fighting raged elsewhere.

“The initial fighting in Ukraine prompted an outbreak of risk aversion in markets, but for now the situation seems to have settled down, at least for markets,” said Chris Beauchamp, chief market analyst at online trading platform IG.

“Western intervention still looks highly unlikely, and for now negotiations continue … For now it looks like bullish sentiment will revive, but there are still plenty of unknowns to deal with.”

Shares of luxury brands such as LVMH and Richemont, which depend on China for a large part of their sales, also declined.

Investors waited for policy decisions from the U.S. Federal Reserve and the Bank of England later this week, with both the central banks expected to raise interest rates.

Hopes of progress in peace talks sent oil prices lower. Oil has surged this month after Western sanctions against Russia over its invasion of Ukraine raised concerns about supply disruptions. [O/R] [MET/L]

French power utility EDF slipped 0.1% after it warned on its 2022 profit outlook, while shares of Italian energy group Eni dropped 0.4% on the company’s agreement to sell a 49% stake in power generation unit Enipower to U.S. investment firm Sixth Street.