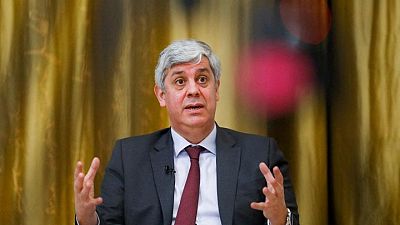 “Monetary policy is changing its cycle, it has to change its cycle gradually and carefully,” he told an event in Lisbon, adding that the ECB‘s recent decision to curb stimulus did not change medium-term monetary policy perspectives.

Surprising some investors, the European Central Bank said on Thursday it would end asset purchases in the third quarter, as soaring inflation outweighed concerns about Russia’s invasion of Ukraine for now.

While the bank announced modest growth downgrades for this year and next, it ramped up inflation forecasts and now expects price growth of 5.1% this year, 2.1% next year and 1.9% in 2024.

Centeno characterised the decision as a means for the ECB to buy more time to examine economic data. He stressed that monetary policy must remain proportionate and maintain the flexibility of measures that was behind its “enormous success” in the past.

He warned of the difficulty of making economic predictions due to the challenges of very low growth and very high inflation but painted a bleak picture of the current outlook.

“We are not comforted today by the robustness of growth,” Centeno said, as the outlook points to “essentially, quarter after quarter, growth in the euro area will be very low, if not zero or eventually negative”.

He said core inflation – purged of volatile factors – is dominated by more external factors, “it is not sustained through second-round wage effects”.

“Labour markets… do not reveal wage pressure problems,” he said.