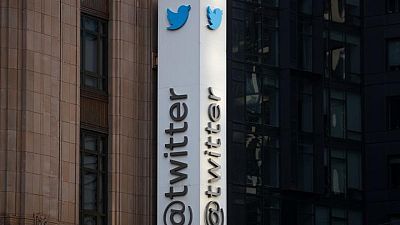 OAKLAND, Calif. – Twitter Inc will place labels on and limit the spread of posts from Belarus state media and their senior staff, the company said on Thursday, in a move aimed to curb misinformation from Russia’s ally in its invasion of Ukraine.

Social media services including Twitter in recent years have begun labeling accounts of state broadcasters and news websites to note that the organisations are government-backed. Labelled accounts and their posts are limited in search results and recommendations on Twitter.

Yoel Roth, Twitter’s head of site integrity, told reporters the company would label about 15 Belurasian outlets, largest among them news agency BelTa, which has nearly 37,000 followers on the service.

“We’ve seen evidence that these outlets as well as their affiliates in Russia have engaged in information warfare, and are employing media and other assets that they control to propagate favorable narratives and to confuse and distract the public about what is going on,” Roth said.

BelTa and Belteleradio did not immediately respond to requests for comment.

Belarus served as one of Russia’s launchpads for its invasion of Ukraine last month. Russia calls its actions in Ukraine a “special operation”.

The leader of Belarus, Alexander Lukashenko, told his defence ministry on Thursday that it must prevent any attempt to cut off Russian supply lines and “strike at Russians from the rear”, according to BelTa.

Twitter’s policy is to only label state-affiliated media “where the state exercises control over editorial content through financial resources, direct or indirect political pressures, and/or control over production and distribution.”

It had labelled media of over 20 big countries, with plans to expand globally. Belarus was prioritised “given the context of the conflict between Russia and Ukraine,” Roth said.

Government and businesses restrictions on Belarus have been multiplying.

The European Union last week effectively banned 70% of all imports from Belarus, and American Express and Dassault Systemes have been among companies suspending business there.